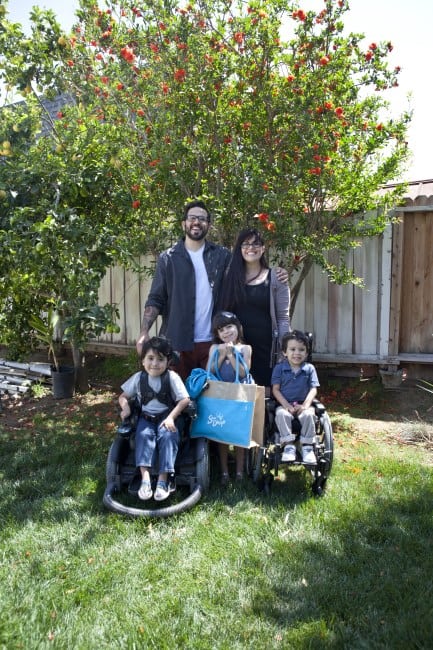 Dad Heroes winner Joe Stoop, pictured with wife Jessica and kids (left to right) JoeJoe, Alicia and Dominik, will be profiled on the Muscular Dystrophy Association Show of Strength Telethon airing at 8 p.m. Aug. 31 on ABC.

A little more than three years ago, Joe Stoop decided to become a stay-at-home dad so that his wife, Jessica, could go back to work as a public health nurse. He jokes that he was lazy, and he thought it would be easy just hanging out with his three kids. “But it was the hardest job I’ve ever had, and I transformed into this person who’s not lazy,” he smiles.

His wife’s essay for the L.A. Parent Dad Heroes competition confirms this.

“Amongst our three beautiful kiddos, we have two with special needs, specifically spinal muscular atrophy (SMA), a neuromuscular disease,” she writes. “The boys, JoeJoe, 5, and Dominik, 3, both in wheelchairs, have to be stretched daily, put into a myriad of durable medical equipment, taken to numerous doctor/therapy appointments, and given respiratory treatments to prevent or treat respiratory infections/collapsed lungs. Since our D-Day (diagnosis-day), my husband has become as skilled as a respiratory therapist and physical therapist. Additionally, when our insurance wouldn’t fund an adaptive chair, he built one.”

Stoop has also learned to adapt other things for his sons, taking toys apart to remove a spring that makes a button difficult for them to push, and rigging light switches so that they can be reached. And he makes time for daddy-daughter dates with 6-year-old Alicia, cooks, does laundry, and “gives amazing foot rubs,” his wife says. Away from home, he spends time as a youth leader at the family’s church, working closely with troubled teens.

We received many, many Dad Heroes entries, and Joe Stoop is our winner this year, but we were delighted to read about lots of other great dads as well. 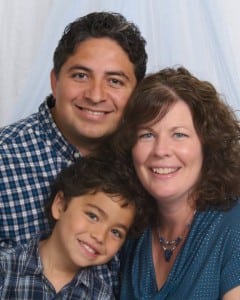 Carlos Angeles also became a stay-at-home dad to care for a child with health issues, in this case without a diagnosis. “Struggling for answers to my son’s health issues, he became the house chef trying to use a scrupulously healthy diet to help,” writes his wife, Kristy Lesan. “At school, he worked in the classroom to be on hand for emergencies.” When their son turned 6, they discovered he could no longer attend school because of the risk of infection, so Angeles began home-schooling him. “The result? My son lives a beautiful life and does not feel the limitations of his health or medicines as the detriments they could be,” Lesan writes. “He is the product of a dad who fearlessly and un-begrudgingly overcame the many stereotypes that made that journey difficult for a man. Instead of my son feeling victimized by life or illness, he feels blessed to have such an amazing dad who has created something beautiful in place of something ugly.” 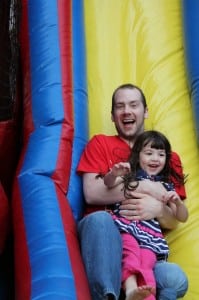 Kyle Cremarosa sings and dances with his daughter despite his cancer diagnosis.

Kyle Cremarosa is another stand-out dad. Despite a cancer diagnosis, six months of chemotherapy, a leg amputation and a cancer re-diagnosis in May 2013, his wife, Anna, says that nothing stops him from spending every minute with their daughter, Olivia. These are a few things Anna shares about Kyle:

• Always in the bounce house at parties
• Will never say no to a random dance party in the kitchen
• So patient and loves teaching Olivia new things (jump rope, roller skating, baking, baseball)
• Happily wears different colored nail polish on his nails, even to work
• Knows all the words to every “Frozen” song (also dance moves to “Let it Go”)

It was fun learning about the many traditions dads had created for their families. Chambers Stevens, for instance, has made it his goal to take his son, Twain, to every park in L.A. County, “which is a lot bigger than most people realize,” writes his friend Lindsey Woods. “So far, they have been to over 60 parks, big and small!” 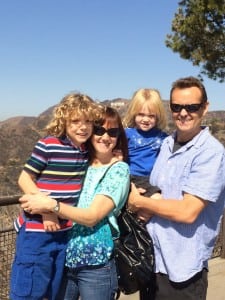 To balance out time spent traveling for work, Jim Baudino leaves hidden notes around the house, “and when I find them they say I love you and have fun drawings on them,” writes his son Aiden Xavier. “Best of all, I love how he dances with Mommy, and we all climb on him like a totem pole,” Aiden continues.

Dea Payette writes that her husband, Mark, organizes mini-backyard camping trips for his family of eight. And Seth Rubin, according to his wife, Jenna, has become a master storyteller to his children. “When he volunteers to read at my daughter’s school, the children sit with rapt attention hanging on his every word,” she writes.

We also enjoyed reading about dads’ acts of heroism, big and small. Nicole Fenyes tells us that her dad, John, is a valet at her school, volunteers in the classroom and even started a dad’s club there. “He has also taught me how to care about others, like when he pulled over in the rain to help an old man get to the bus by holding his umbrella over his head (that made me cry),” she writes. 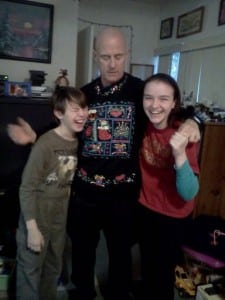 Charles Griffith’s son, Danny, and daughter, Katie, both wrote in about his heroic acts. On a hike one day, Danny put a toy boat into a creek and it got stuck in a culvert. “Other dads would say, ‘Let’s go, we’ll get you another one.’ My dad said, ‘Give me a stick,’ and he climbed right through the tube that was filled with rushing water! He got my boat and gave it back to me!” Danny writes. For Katie, Charles was a good enough sport to enter the Ugly Sweater Contest at a Boy Scout Christmas party. And he won! “I think a good dad would take you to the party. A great dad would take you to the party and play some of the games with you. But, an awesome dad would take you to the party, play games with you and endure all the laughs from everyone, just to win their kids a prize,” Katie writes. “That is exactly what my dad did!”

And while Kyle Bourcher says his dad, Mario, would risk his life for his family, risking a fall or two seems to have been enough to make him a hero to the young hockey player. “I was amazed that my Dad skated on ice for the first time in 25 years so we can practice together,” Kyle writes. 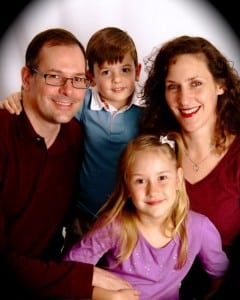 Plenty of the nominated dads are also heroes in their communities. Jonathan Watts, for instance, is the founding co-leader of a Girl Scout troop. “When no other troop had space for our daughter, Jonathan moved mountains to find time to attend all the trainings in order to start a new troop,” writes his wife, Militza. “Jonathan is helping build a strong foundation for not just our daughter, but for all ‘his girls’ in the troop.”

Mateo Dordi wrote in to tell us that his father, Firdaus, has a secret identity. By day, Firdaus Dordi is a lawyer, but on Wednesdays and Saturdays he leaves the office before his usual 9 p.m. quitting time. “This is his secret identity,” writes Mateo. “He is a basketball and soccer coach. Sometimes, he plays with my brother and I outside to work on our game, or he’ll show us footage from a past game. He also calls all the parents and makes sure everyone is coming and knows their snack-duty roles.”

Rajeeve Jhangiani is an active volunteer at his daughter Simone’s school, working in the after-school program, helping with fundraisers and book fairs and as a member of the PTA. And on weekends he volunteers at a children’s hospital reading to patients, and organizes other charitable events. 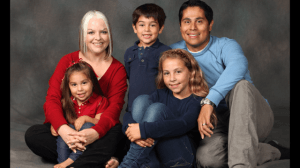 Dave Marrujo is active in sports, school and Boy Scouts, but also gets up early to fill his wife’s car with gas.

Dave Marrjuo is a stay-at-home dad who also is VP of the local Little League, co-den leader of his son’s Boy Scout troop, communications director for his children’s school, and a volunteer softball coach and AYSO referee. “And to top it off, knowing how much his wife hates to pump gas, he occasionally gets up at 5 a.m. to fill up my car before I leave for work so that I don’t have to,” writes his wife, Brooke.

Some of the nominated dads have been heroes through illnesses in the family, or in supporting their children with special needs. Juan Alamillo, for instance, has been there through both of his wife’s parents’ battles with cancer, his daughters’ hospitalizations with seizures, and bouts of unemployment.

Harry Chang has a full-time job, is working on a master’s degree, has coached all three of his children’s soccer teams and is always there to help with homework. And since his son Tyler’s surgery to remove a brain tumor in 2009, he has been there for every doctor’s appointment and test.

Matthew Asner went through a tough battle to gain custody of his son, who has autism, and is executive director of Autism Speaks “and works tirelessly for all the families in our community affected by autism,” says Navah Paskowitz. And Paul Joseph, along with his wife, Andrea, runs the local nonprofit Epidermolysis Bullosa Medical Research Foundation, dedicated to finding a cure for this painful and life-threatening genetic disorder. On a more personal level, he helps care for his son, Brandon, who has EB. “When my skin hurts, he wraps me up to help the boo-boos,” writes Brandon. “My dad helps me every day.”

Some of the heroic dads we learned about are a bit non-traditional … but dads all the same. 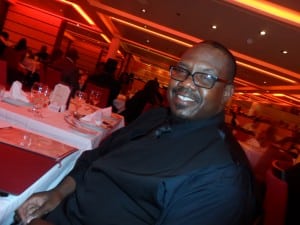 Kaitlon Williams wrote to tell us about her uncle, Jimmy Jones, who fills in for her absent and uninvolved father. “We’ve been to the zoo and museums and even road trips,” Kaitlon writes. “He acts like I am his daughter, he talks to me about sports and plays board games with me, too.” Her uncle discovered that she 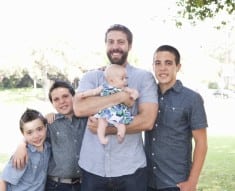 liked to swim, got her lessons, and showed up to cheer her on. She is now on the swim team. “He is not like a regular superhero. He is better because he is real and he saved me,” she writes. “I used to think that dads really didn’t care, but now I know real ones do.”

Matt Russell and Angelique Mattin Russell decided shortly after they were married that they wanted to adopt children. In 2011 they found their way to 9-year-old Cirrus and 5-year-old Jerry, two brothers who had never attended school, and eventually to their older brother Soular, 14. “That summer, Matt dedicated every single day to tutoring Soular, Cirrus and Jerry to make up for nearly three years away from school,” Angelique writes. “It was not easy, but Matt has a gift for making everything fun and worthwhile.”

We are delighted that so many families wrote in to introduce so many incredible dads. And, L.A. fathers, whether or not you found your name in these pages, we want you to know that at L.A. Parent, you’re all heroes. 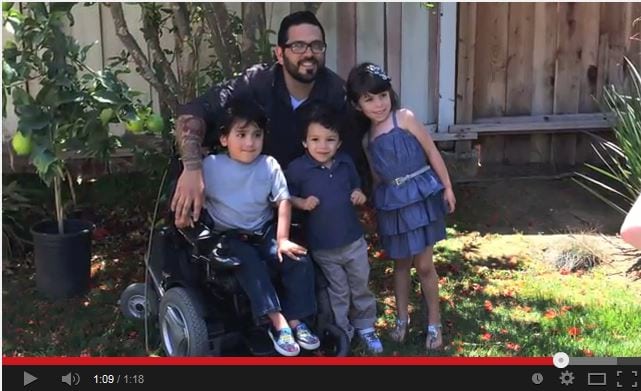 Click here for a behind-the-scenes look at our June cover photo shoot.

We wanted to treat some of our Dad Heroes to a little special family time – and some fantastic local partners pitched in with prizes.

• a two-night stay in deluxe accommodations at the Loews Coronado Bay Resort, plus kayak rentals and a $50 food and beverage gift certificate;

• one family dinner at the Corvette Diner, a ’50s-style restaurant where disc jockeys, balloon artists and magicians provide entertainment.

Dad Hero finalists Carlos Angeles and Kyle Cremarosa and their families won tickets to Aquarium of the Pacific in Long Beach, displaying more than 11,000 animals in more than 50 exhibits that represent the diversity of the Pacific Ocean. They also each received a $75 gift certificate to Bubba Gump Shrimp Co. and Mai Tai Bar Long Beach.