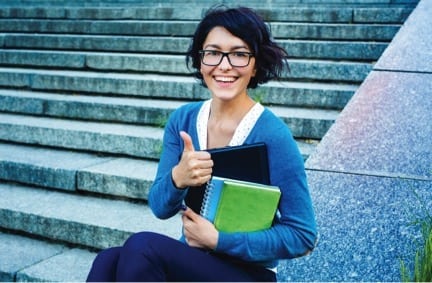 It’s tough to write a college application essay. Or so I hear. I’ve never actually written one.

The college essay is a rite of passage for American teens, and high schoolers all over California are now preparing to write their essays for 2018. I did not go to university in the U.S., so I never had to craft a piece of writing with so much hanging in the balance. But I hear stories from parents about the stressful process, and from students worried about how to stand out amongst thousands of submissions.

The Princeton Review calls the essay or personal statement “a unique opportunity that can make a difference at decision time.” While the most weight in the admissions decision is given to GPA and test scores, some colleges and universities receive applications from many students with similar grades and scores. The essay is one factor that sets students apart.

Armaan Sood-Mankar, a 17-year-old competitive swimmer and senior at Eagle Rock Junior/Senior High School, learned this lesson on a visit to Yale University earlier this year. An admissions officer told him, “There is little you can do to control your admission chances. Most of your work has already been done: grades, testing and extracurricular activities. The essay is the key to making it in.”

So, all other things being equal, getting into an Ivy League school can hinge on luck and creativity. “Sadly, it all comes down to whether or not the person reading your essay likes what they read,” says Sood-Mankar, “and that’s scary.”

Not quite knowing where he would like to apply and what he would like to study heightened Sood-Mankar’s stress. This is why experts recommend that students begin researching schools during their junior year, and have continuing conversations with their parents about their interests, school options and career choices.

Danny Ruderman, an independent college counselor and author of “The Ultimate College Acceptance System” and “Top 100 Answers to your College Admission Questions,” starts working with high school juniors in January, starting them off with “Why?” research. By checking out different schools online and visiting as many as possible – large and small, public and private – students can narrow their choices and decide what is important to them. He recommends a list of just six to 12 schools as the best range to apply to. More than that and the student can get burnt out.

L.A. education consultant Quynh Nguyen also recommends students check out schools’ essay requirements well ahead of time. “Start thinking about it early,” she says. “Have as clear an idea as possible what is being asked for in the essay. Good writing is only as good as good thinking, and that takes time.”

Nguyen says parents and teens should have open discussions that encourage self-reflection on the student’s choices, experiences and dreams. She starts introducing the idea of “your story” during the second semester of junior year. “This is just to plant the seed,” she says. “Writing about oneself is incredibly difficult for anyone, not just college-bound students, so it’s good to give the student time to observe and reflect on his or her life.”

Priscilla Sands, head of Marlborough School, an independent day school for girls in grades 7-12 in L.A.’s Hancock Park, has 80 to 90 seniors working with three full-time counselors in the school’s Office of College Counseling. She says that starting the essay process during junior year helps minimize stress in the fall. “It also affords students the time to use the summer to reflect on the direction of their essays,” she says.

What to Write About

In planning what to write, Ruderman says authenticity is key. “When you’re 17 and applying to xyz schools, you want to impress because you know how hard it is to get in, so kids write over-inflated essays,” he says. “But you just want to present yourself as a person. Admissions people want to get to know you, really who you are.” 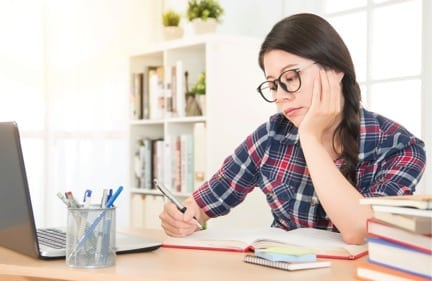 Authenticity also makes your story stand out. Admissions officers might be reading 2,000 essays over a six-week period, and often read the same themes over and over. “If I tell you a story that only happened to me,” Ruderman says, “that is more interesting and it also shows, it doesn’t just tell.”

Ruderman was the first person from his family, and just the third from the Southern California public high school he attended, to go to Stanford. One of his best-known clients, SnapChat founder Evan Spiegel, had his sights set on Stanford as well but didn’t think he could get in. “His essay was about how his mom didn’t let him watch television when he was growing up, so he built forts in his living room instead,” Ruderman recalls. “He had to do something, so he started designing things, later studying product design.” And, yes, he got into Stanford.

Ruderman says students often believe they have no experiences worth sharing, so he asks lots of questions because “talking out loud gets the brain working.” These questions often spark ideas, but choose your ideas carefully. “If you say, ‘I love baseball, I’m really good at baseball,’ I don’t really learn anything about you,” explains Ruderman, adding that each topic should reveal something important and unique about the student’s personality, work ethic, character, maturity or ability to handle conflict. “It is through conflict that character is revealed,” he says. “I’ve had kids write about a failure, because it was really about the process of learning about oneself through that failure.”

“Every person has a compelling story and I usually begin by creating a detailed timeline of their experiences,” says Nguyen. “What is the story being told here? What does it say about this young person? Her maturity, self-awareness, thoughtfulness, skills, interests?” She warns students to stick to the truth, despite the temptation to embellish. “Most embellished stories sound the same, and when you read as many essays as I and admissions people do, they stand out as fiction,” she says. “But, truth can be hard to get at, so I work with my students to take them to the next level of their capacity to critically think, reflect, assess and write.”

Nguyen encourages authenticity, but advises avoiding controversial subjects. “One of my students grew up amidst violence in the Middle East, and happens to be very interested in world politics,” she says. “He wanted to write about the ways he supported the Philippines President Rodrigo Duterte’s decision to turn justice over to the people in the form of vigilante killings. Instead, I guided him to weave his history with experiencing violence into how he wants to create change in his community.”

How to Write It

As soon as essay topics are announced, usually around Aug. 1, Ruderman encourages students to gather all the essay information, including deadlines, in one document, so they can plan their strategy. “There is a perception that kids have to spend hours writing these essays, that they have to write 20 essays,” he says. “That’s not true. They probably have to write four or five, which they can recycle and keep using, tweaking them as needed.”

When it is time for students to put fingers to keypad and actually tell their stories, how they do it is key. “A very important part of the essay is the way you write it,” says Sood-Mankar. “This isn’t talked about as often. The admissions officers should hear a unique voice that sounds different from the pile of essays he or she will be reading. There shouldn’t be an essay that sounds similar to yours in any way. If it does, that means you could possibly blend in with the crowd.”

Just don’t try to stand out in the wrong way. “Be yourself,” says Sands. “Do not try to be funny or write in a manner that shows off your intelligence in an inauthentic way. The college admissions officers are trying to know the real you, not a sanitized version of yourself.”

Do pay attention to grammar, style and tone. “A compelling story is only so if it makes good on word choice, flow and other elements of style,” says Nguyen. “This tells an admission committee a lot about a student.” Students also must keep within word count. “The word limit is usually quite low, and this is a test of the student’s ability to get to the point but also incorporate elements of good storytelling,” Nguyen says.

Now, let’s return to the opening lines of this article. Did they make you ask, “What is this writer going to say? What does she mean she has not written a college essay?” I hope you were intrigued enough to keep reading. I wanted to pique your interest enough to get you to this paragraph.

Grabbing the reader’s attention is exactly what college applicants need to do. Read opening lines from essays by five students who got into Stanford University:

“Unlike many mathematicians, I live in an irrational world; I feel that my life is defined by a certain amount of irrationalities that bloom too frequently, such as my brief foray in front of 400 people without my pants.”

“Sitting cross-legged on the floor of a Bhimanagar slum dwelling in Bangalore, I ran my fingers across a fresh cut on my forehead.”

“When I was 8 years old, I shocked my family and a local archaeologist by discovering artifacts dating back almost 3,500 years.”

“When I was in eighth grade I couldn’t read.”

Each of these opening lines is creative, intriguing and one of a kind. Admissions officers reading one student’s words could not mistake them for another, and they would definitely want to keep reading.

High school senior Sood-Mankar aspires to something similar. “I want to write something that I could give to someone I know, and they would immediately know that it was about me,” he says. “If you can draw someone into your world, they have an easier time with the decision to admit you.”

Kaumudi Marathé is a frequent contributor to L.A. Parent and mother to a teen daughter. She lives in Glendale.