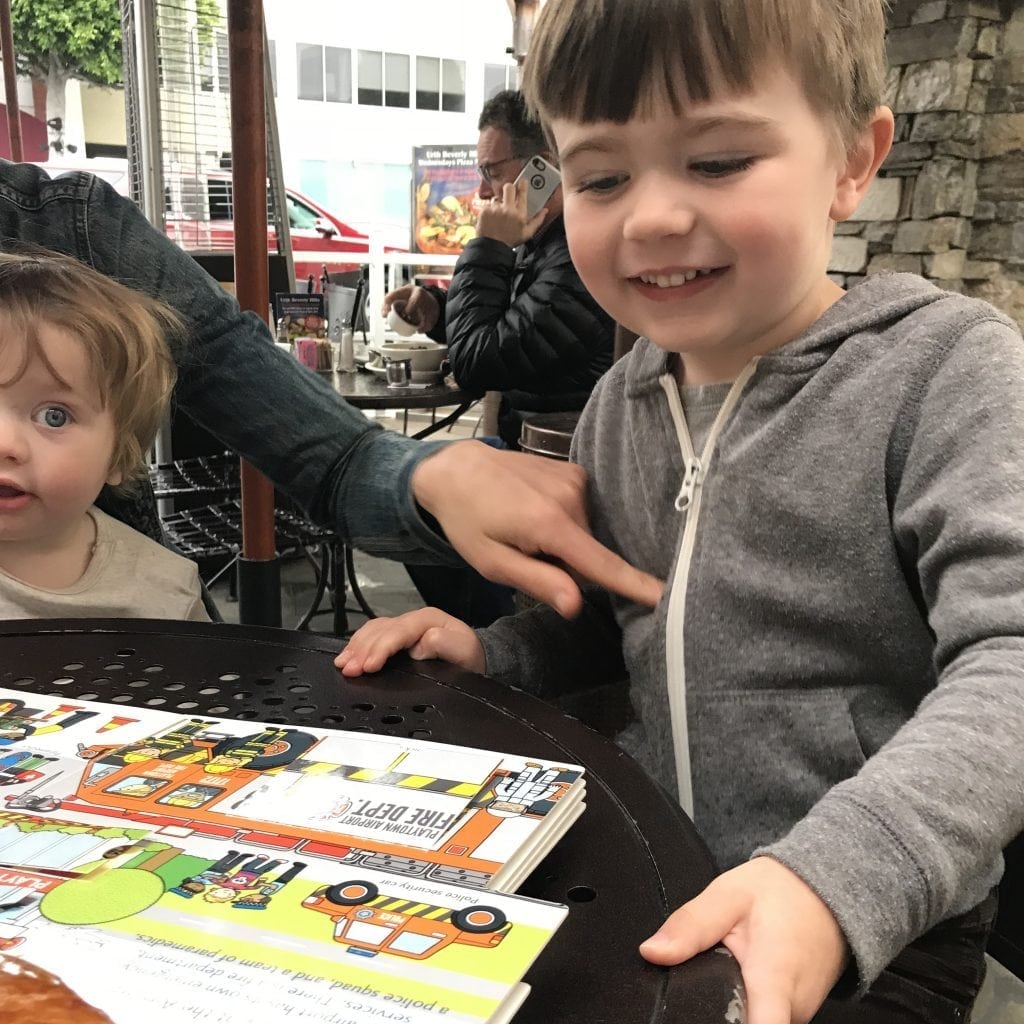 On Sunday, Kate and Isaac Parfrey are awakened by Leo, whose cry pierces through their Westside bungalow. Kate retrieves the 1-year-old and the squeal stops immediately. Silence. Beautiful silence.

Isaac’s attempt to sleep in is thwarted. He rises and prepares two pots of coffee, one for each catatonic parent.

Hank, a 3-year-old boy going on 16, approaches his parents at the dining table. He rubs his eyes and yawns.

Kate and Isaac look at each other, lost. They have no plans. They were hoping for a lazy, uneventful, relaxing day.

Isaac (to Kate): “I used the last of the eggs yesterday. They’re Leo’s protein of choice at the moment and we’re blowing through a dozen every five days.”

Isaac: “Too far. How about Trader Joe’s?”

Kate: “I don’t like their eggs. How about Erewhon? We can put off paying rent for a couple months, right?”

Kate groans, remembering their last attempt at brunch out with the boys, at the trendy République on La Brea. Isaac convinced Kate with his catchphrase, “I’ve heard good things!”

Later, he would explain that the trick is to go early, that the family brunch rush has an 8-9:30 a.m. window. Scenesters do not rise early enough on a Sunday to generate a two-hour wait at 9 a.m.

Unfortunately, Isaac and Kate arrived at 9:30 a.m., entering a confusing to-go/dine-in line strung beside unbearably tasty-looking pastries and goodies that called to Hank like sirens. An infinite dialogue of “I want that one” and “No, not today” ensued. They eventually found a table and managed to not enjoy the best shakshouka of their lives. Hank spun around on an industrial-chic stool until he became nauseous, nearly expelling his kouign-amann on a guy from television whose name they could never place.

Kate: “OK, just not République. What about Sycamore?”

Kate is referring to The Sycamore Kitchen, also on La Brea and also somewhat trendy. However, Sycamore prides itself on its kid friendliness. Every morning between 8 and 10 you can count on local families eating pumpkin bread and financier muffins there with their toddlers. Hank enjoys standing in the booth shouting for more bacon and orange juice. Nobody blinks. That’s the sign of a good family joint.

This changes everything. Isaac glances at Kate.

Isaac: “How about Uncle Bill’s?”

Kate: “I don’t want to schlep down to the South Bay. Remember when we drove down there before?”

Isaac knows this is a tall task. As fond as he is of classic L.A. institutions, a visit to a place like Uncle Bill’s Pancake House in Manhattan Beach can become an all-day excursion. It’s bustling with families from throughout L.A. And the pancakes might not be as good as eavesdropping on conversations about volleyball tourneys, kids’ yoga and which L.A. King is on the waitlist ahead of you. Also, once there, Hank will take note of the ocean and want to hit the beach.

Isaac ponders Du-par’s at the L.A. Farmers Market, another institution and also especially noteworthy for its stacks of pancakes. He quickly rethinks this idea. Du-par’s may not welcome the sheer volume of Hank’s joyous pancake love. This environment is more suited to quietly savoring buttery flapjacks alone.

Isaac: “I think we should just go to Urth.”

Kate nods in agreement. This is a millennial parent favorite. The Beverly Hills and Downtown (avoid Santa Monica and WeHo with children) locations are welcoming, allowing kids to roam and spill cucumber water to their hearts’ content. There, they can hook up the kiddos with generous supplies of fruit and yogurt, and let Hank rip the buttery insides of his croissants with his teeth, leaving the crispy crust to the pigeons.

The Parfrey family arrives at Urth Caffe in Beverly Hills. Hank immediately plants his nose on the glass case of muffins and cakes. He points at a berry-and-cheese Danish.

Finally back home, Isaac, Kate, Hank and Leo climb into bed and fall back asleep.