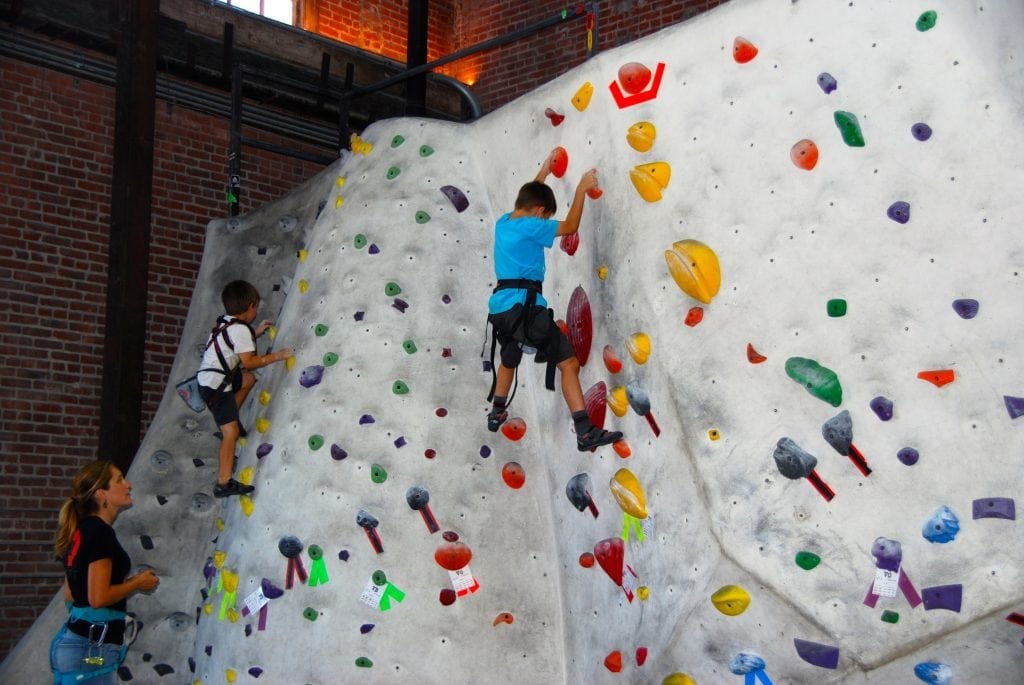 If monkeys had a playroom, it would be the Stronghold Climbing Gym in Downtown Los Angeles. Located in the historic building that once housed the California Edison Company’s Los Angeles #3 Steam Power Plant, in the Brewery Arts Complex, this state-of-the-art facility houses hundreds of opportunities to scale walls and find routes to the top, across and under various types of simulated climbing terrain.

For those who climb, it seems to become more of an obsession than a sport. Owners Kate and Peter Mullen opened the gym two years ago and are quickly expanding their programming, offering a summer camp and classes for ages 5-14.

During the Friday night after-school program, Ross Francis teaches climbers ages 5-11 how to climb safely, overcome their fear and build strong bonds with each other. Kids flock to embrace their inner monkeys and spiders, scurrying up vertical walls, working those seldom-used muscles that give them inner and outer strength.

Camp Director Jess Moran says the kids who come to climb at the gym blossom in a way they might not without the challenges they experience there. “Some of these kids may be athletic, but they might not gravitate toward team sports,” she says. “This is the perfect outlet for them because they’re still using their bodies, but they’re competing against themselves.” Nearby, 7-year-old Rio illustrates Moran’s point, demonstrating her prowess by casually bounding up a convex wall and holding on with her little fingers as her body seems to defy gravity.

Eight-year-old Jack Knapp has only been climbing for eight months but is already on the climbing team and learning how to lead, which means he inserts hooks that support his rope into the crevices in the “rock” as he scales upward. “He’s never found anything that has maintained his attention like this,” says his proud dad, who doesn’t climb.

Stronghold Climbing Gym (650 S. Avenue 21, L.A.; www.strongholdclimb.com) also offers daily yoga classes and a fitness gym that is included in the membership fee of $69 per month for kids, $79 for adults. Day passes cost $20.