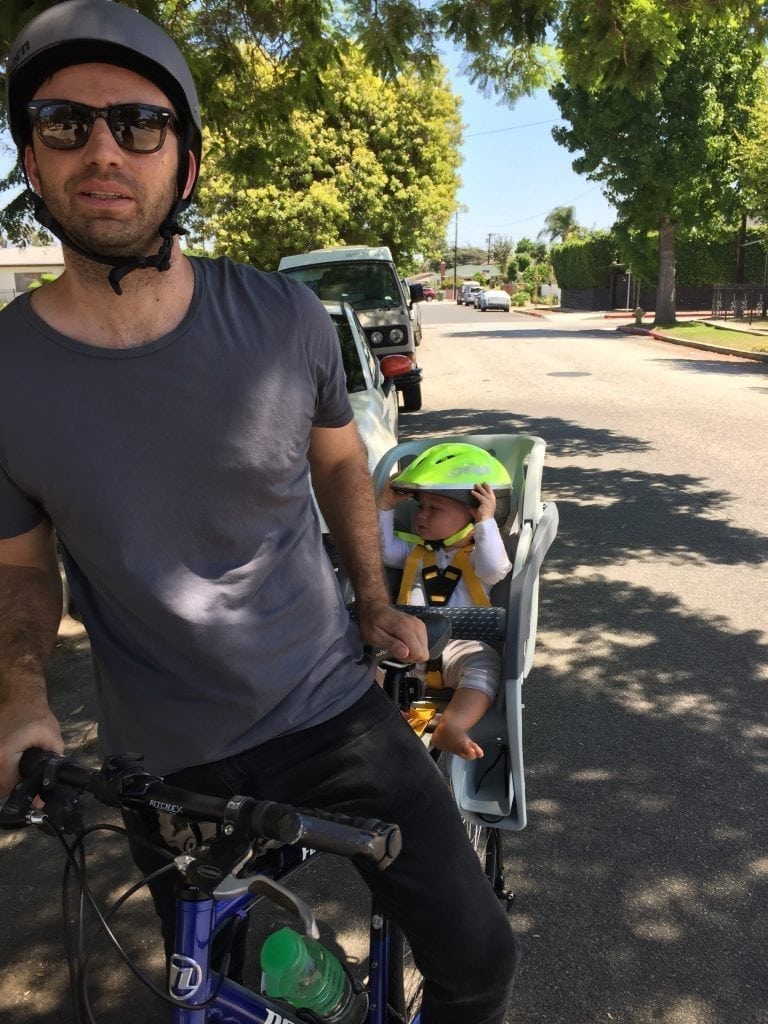 When I was a single lad in my 20s living along the Miracle Mile, I commuted to work in Santa Monica by bicycle. Four days a week, I placed my young life in the hands of Los Angeles traffic. This was unwise according to my future wife, who worked as an RN in the ICU at Cedars-Sinai and saw countless critical bike accidents, the details of which I will mercifully spare you. I always attempted to be as safe as possible – helmet, reflectors, bright clothes, the whole nine – yet there was the inevitable Beverly Hills octogenarian’s Mercedes poking its blind nose at my front wheel. Luckily, my reflexes were sharper then.

Flash forward to 2015, when CicLAvia, L.A.’s cycling love fest, came to the Westside. The route to the beach was seconds from our front door. Married and a dad, I put my traffic flashbacks behind me and set out to attain the appropriate accoutrement for cycling with a baby.

When I was a kid, I believe all that was available was the front handle bar child’s seat, which parked kiddos right in their fathers’ field of view and left dads struggling to keep their balance as the tots squirmed and bounced. Now that cycling culture has been fully adopted by the urbanistas, there are plenty of devices to help you transport your kids by bike. We have the rear front-facing child seat, the stretch-limousine-style bike with safety railing and built-in cup holders, and the trailer that places your kid right at SUV tire elevation – to name a few. I am glad we’ve made strides. I bought Hank the rear bike seat for CicLAvia. He cried the whole time.

Since that fateful day, however, Hank has grown to love riding in the bike seat. He and I have now traversed so many of Southern California’s bike routes that my legs are getting tired just thinking about it.

On the Beaten Path

A most popular, perhaps hackneyed, ride is the Ballona Creek path, where you might see the UCLA rowing team claw itself through raw sewage. “That water is dirty,” says Hank. The path starts at Syd Kronenthal Park in Culver City and runs about seven miles to Marina del Rey.

From there, most dads will take the trail south along the coast toward the beachy-clean communities of Manhattan, Hermosa and Redondo. Your child will love the southern route (as does mine) mostly because of the flock of 747 takeoffs above Dockweiler Beach. Just be careful of bonfire hipsters and tailgate partiers. They don’t really pay any attention to the bike lanes.

I often opt instead to head north, where the path snakes its way around Marina del Rey. It’s not an efficient route, but if you have young children with an irrational love of marine life, this might serve you better than the southern path. Stop by one of the Marina’s many docks and you might spot grazing sea lions. Herds of pelicans (is it herds?) hang out by the dockside eateries, noticeably leaving their mark. Hank thinks they are dinosaurs. Eventually, you will find yourself at Venice Beach, where a very different type of wildlife is native. It’s best to travel fast through these parts with kiddos (I try to make it through without picking up too much of a contact high). The carousel and Santa Monica Pier make a welcome final destination.

A Long and Winding Road

If the beach is not your bag, or just not nearby, consider the San Gabriel River Bike Trail. The 30-mile path begins at the Santa Fe Dam in Azusa and will eventually take you all the way to Seal Beach and the ocean. What the northern leg lacks in ocean views, it more than makes up for in views of concrete. That said, on a clear day (especially in the winter), the view of the San Gabriel Mountains behind you will make it worthwhile.

Most of the path hugs the southwest side of Interstate 605. Therefore, I suggest starting at the very beginning in Azusa and taking advantage of the first 10 freeway-free miles of the trail through the foothills. Much of this portion snakes through the protected Santa Fe Dam Recreation Area. The lack of foot traffic here is a clear bonus. And when you get tired and stuck in Cerritos, you can buy a car to drive home.

All of our time along these and other routes has inspired the Hankster to ride his own bike. We tried several tricycles but Hank was never really a fan, and often frustrated with the pedals. The stars aligned when Hank found his Strider – the sleek, pedal-free ecto-green balance cycle. Ever since, he and his balance bike have been off to the races. I’m glad to see him taking after his old man, though I hope that doesn’t mean, when he’s in his 20s, he’ll be dodging Blue Buses and Dogtown skaters.