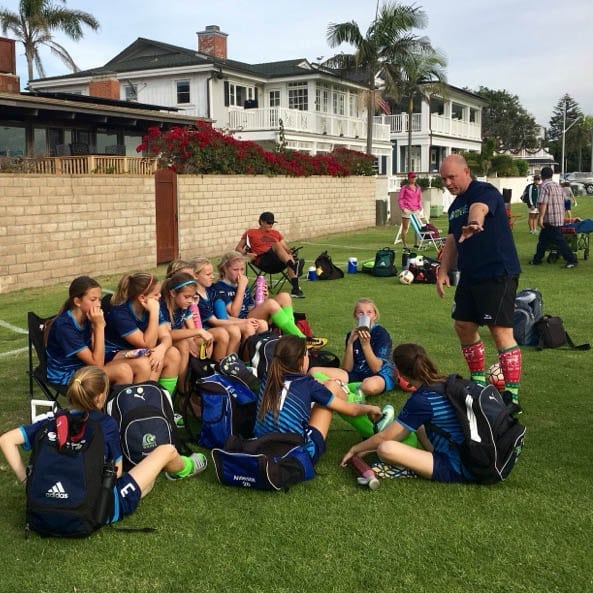 Bill Worden has been coaching AYSO soccer for 11 seasons, and says a great youth coach has the heart of a teacher. PHOTO COURTESY BILL WORDEN

Phil and Michelle Dozois of South Pasadena have been in the fitness game for decades. Michelle got hooked with her first gymnastics and dance classes at age 5, and went on to win gold medals in the National and World Aerobic Championships and create top-selling fitness DVDs. Her husband, Phil, has been a personal trainer for 25 years, and together he and Michelle opened their own health club – Breakthru Fitness – in 1998.

They are also parents of a 14-year-old daughter and 17-year-old son, who, of course, are natural athletes. Right? Not exactly. “We struggle like every other parent that is trying to get their kids to stay active and put their devices down,” says Michelle.

The two do manage to keep their kids moving – as we all should. But what if you’re not an award-winning fitness professional? What if you’re not even part of the meager 20 percent of adults in the U.S. who exercise regularly?

Getting off the Couch

Taking a walk is the best place to start. “There is light cardio and it also provides a little bit of weight-bearing exercise,” says Phyllis Mo, D.O., a family medicine physician at Huntington Hospital in Pasadena. “You’re supporting your own weight, which is helpful for building muscle and also for bone strengthening.”

Walking helps the Dozois family be active together and is part of the routine for many active families. “Probably one of the best things we did was that we got a couple of little dogs,” says Phil.

Mo says the best time to walk is after your biggest meal of the day, because it helps with digestion and burns calories. What you’re doing is building a habit. But remember to spice it up at times. “For kids, you’re really trying to find things that they’re interested in, because they get bored easily,” says Mo. “Their motivation for exercise is different than ours.” Adults might want to achieve or maintain a healthy weight, reduce their risk of disease or even boost their energy level. Kids just want to have fun.

Antonia King, founder of Zooga Yoga, says all three of her kids have taken classes at her studios, which include locations in Culver City and Redondo Beach – with a new franchise opening this month in West Hollywood. But the family also does things together. “We ride bikes. We try to go to the beach. The kids like to go to the skate park,” she says. “We have a labradoodle we bought two years ago, so we walk the dog.”

The Dozois family has experimented with a broad range of activities – from trampoline and water parks to laser tag and rock climbing. “We’ve tried all different things over the years,” says Michelle. “Anything we can do that brings us enjoyment and that exposes them to something. My son didn’t like the flying trapeze [on the Santa Monica Pier], but my daughter loved it.”

Once you’ve made moving a daily habit, you might decide to join a gym or fitness center. Michelle Dozois says you can find the right fit by asking: “Is the energy right? Do I feel like I fit in? Do I see someone who looks like me here?” The focus at Breakthru, Phil says, is on connecting with members and connecting members with each other so that people who join keep coming back.

Convenient location and parking and fun activities also make a difference. “Find a place that you like to go to, with staff that you like and activities that you enjoy,” Mo says. “If you’re a person who enjoys group exercise, find a gym that has good group exercise with good instructors instead of a gym that mainly focuses on weight training or treadmills and lifting.” If you do plan to use the fitness equipment, take advantage of the free training sessions offered for new members.

One place that might be a fit is your local YMCA. “The Y is like a community, and we have something for everybody,” says Michelle Dengler, senior director of healthy lifestyles at the YMCA of Metropolitan Los Angeles. Most branches have a pool and all have fitness equipment for cardio and strength training, as well as group fitness classes that include yoga, Zumba and pre- and post-natal exercise. Programming for children includes dance and sports. The new Collins & Katz Family YMCA on the Westside even boasts a children’s activity center and a youth and teen center. And being around other kids will make exercise more fun for yours. “They’re going to look forward to coming to the Y to play with their friends,” Dengler says. 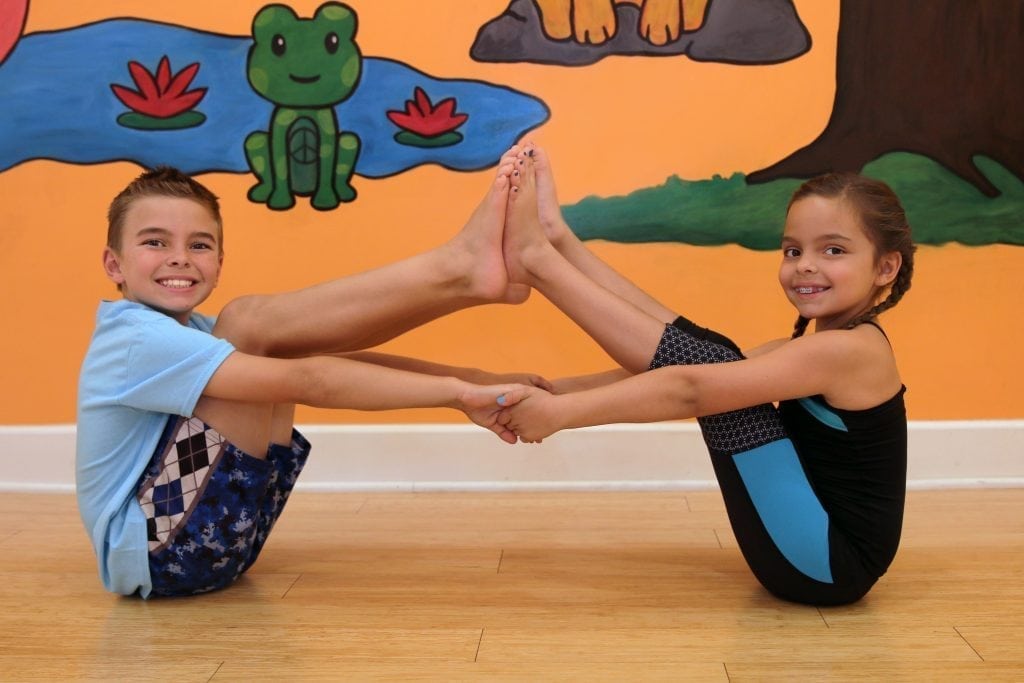 Hudson and Mila King enjoy “boat pose” together at Zooga Yoga, the franchise founded by their mom, Antonia. PHOTO BY AMANDA WEST PHOTOGRAPHY

Zooga Yoga also has a community vibe and offers classes for parents as well as kids. “We cater to the parents that have never done yoga before,” King says. “We walk them through the whole process so everyone feels welcome and at ease.” Moms using the Peanut app (which is kind of like a dating app but is used to arrange play dates) have even arranged to meet up at Zooga. “This has become part of these families’ lives,” King says.

Fitness experts say most people find it easier to stick to a fitness plan if they don’t go it alone. “Usually, people do better with some sort of leader or coach,” says Michelle Dozois. “And we know that people tend to be more successful when they’re exercising with other people.” For that reason, Breakthru Fitness offers plenty of small-group classes where members work with a trainer.

RELATED: Families Get Fit Together at North American Athletic Club in Northridge

Someone at Breakthru always sits down with new members to discuss their goals and challenges, uncover what worked for them in the past and connect them to activities that are the best fit for them now. “If we can get them connected and educated, so that they meet some other people, in a sense, it’s like a support group,” says Michelle.

The YMCA can also hook you up with someone who can help you figure out which equipment to use or which classes to try. Got your eye on the Life Fitness PowerMill (think stair stepper meets escalator) or the TechnoGym Skillmill (like a treadmill but with a quirky curve)? Don’t fly solo. “Our wellness center is a great place for somebody to start, because we’ll connect you with a coach,” Dengler says.

A good coach or teacher is also key if your child wants to take up a sport. When Bill Worden’s oldest son Conner turned 4, they signed him up for AYSO soccer and the team was in need of a coach. Worden stepped up to help, and he has now been coaching in the Long Beach area for 11 seasons.

A coach’s – and parent’s – first job is to make sure young athletes are having fun. “That will motivate and drive and keep them involved more than anything else,” Worden says. For parents, this means leaving your ego out of it and letting this be your child’s game. “When you go to watch your child play, think of it as a performance and not a battle,” Worden advises. You wouldn’t stand up during a dance recital and yell at your child to twirl faster, right? 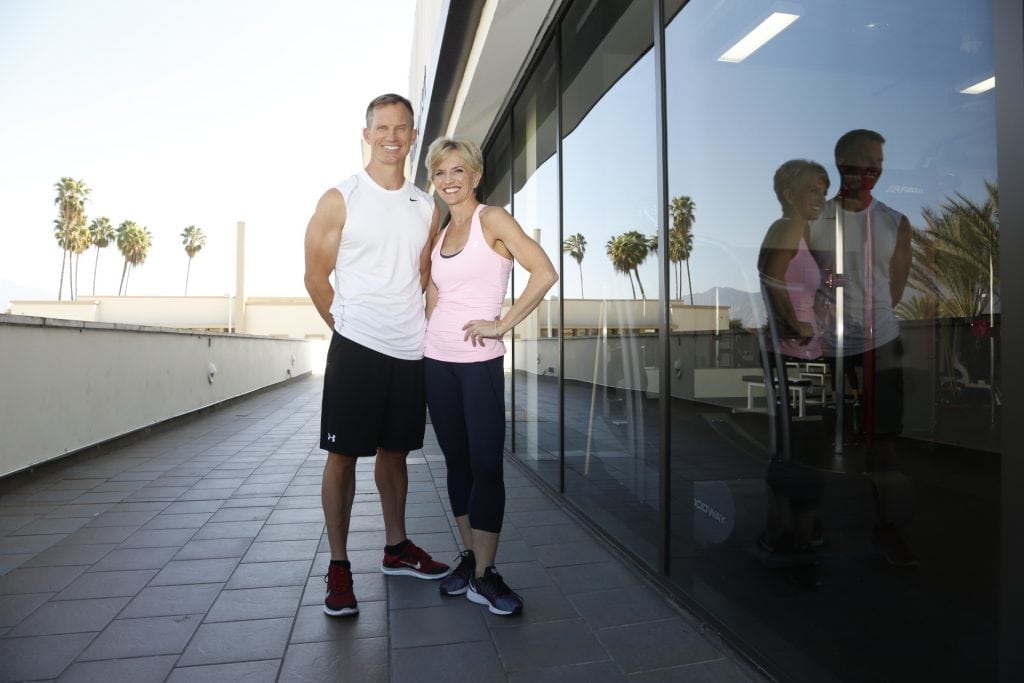 For coaches, it’s important to put winning and losing on the back burner. “A great youth coach is one with the heart of a teacher,” says Worden, who also trains coaches. “They really need to be focusing far more on the development of the child within the sport and as a human being than on the results of the game itself,” he says.

Jeff Julian is head swim coach at the Rose Bowl Aquatics Center, where swimmers range in age from infants on up. He has a similar take on his role. “I teach life lessons through the sport of swimming, and that’s what I love about this sport,” he says. “The goal isn’t to swim faster necessarily. It’s to learn the process and learn how you become successful in the sport.” The center has programs for a range of swimmers, whether that’s water polo, diving, lessons, therapeutic swimming or competition. “We have a 92-year-old swimmer on our master’s team that just broke a world record in her last meet for her age group,” Julian says.

But what if your kid doesn’t like to compete? King’s middle son is active in soccer, basketball and baseball but also practices yoga. “He’s on a club soccer team that’s very competitive, so the yoga kind of balances that for him,” she says. On the soccer field, yoga also translates into calm, coordination and balance. King’s oldest son, however, isn’t into competitive sports. “My 12-year-old son tried all the sports, but he would cry on the field because he felt very insecure,” she says, adding that yoga can give kids like him a great workout. “They’re getting a physical activity without being competitive. And they’re making friends and they’re sharing.”

Whatever gets you moving, you have a key role in making exercise a lifelong habit for your kids. “I think one of the most important things parents can do is to introduce kids to fitness or to sport or to activity, and to help them understand that moving or being active is a part of their life that needs to go beyond youth,” says Michelle Dozois. 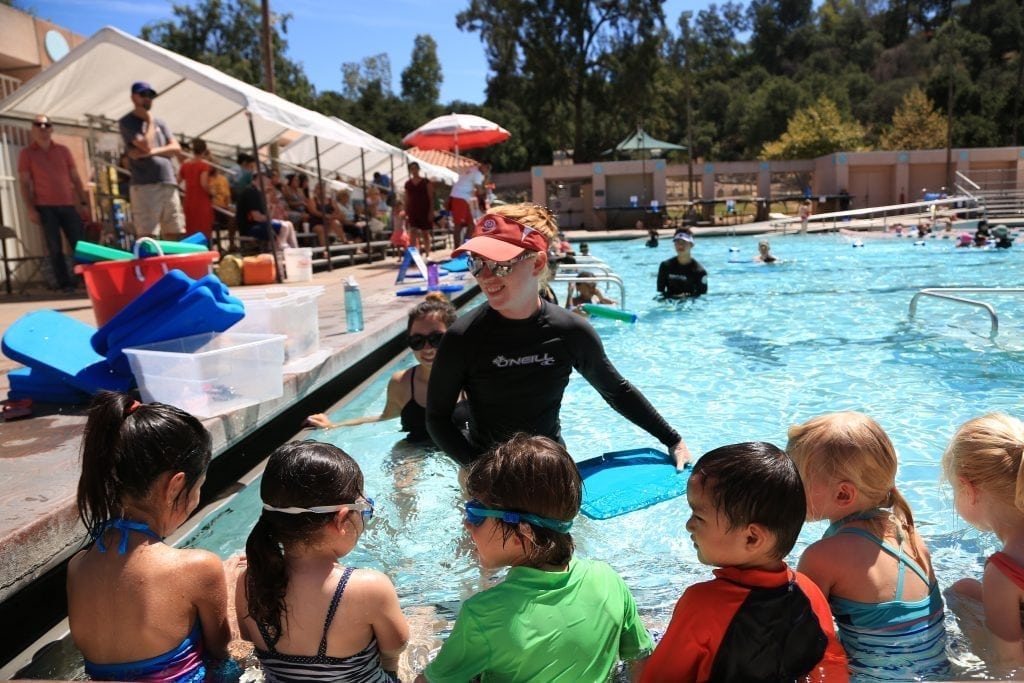 The Dozois’ son has tried soccer and martial arts, and their daughter is in cheer. “The social piece is more important for her, but it’s keeping her active, so that’s a win for me, too,” says Michelle, adding that if you set the example, the kids will eventually come around. “Even if they may not be following in your footsteps in the moment, they see that as a normal part of life.”

Need evidence? Worden played soccer from childhood through college before becoming a coach. His son Conner, 16, plays for his high school team and son Cole, 13, plays for a club team. This is Worden’s last year coaching his 11-year-old daughter, Ryan, in AYSO. Dengler’s children, who all spent time with her at the Y as kids, are now active adults – and her daughter even teaches dance. Julian has a son who is a freshman at UC Berkeley and swims there.

Ready to get started? Just pick an activity, make a plan and dive in. “But give yourself a time frame,” urges Julian. “If you just go once or twice or three times, it’s easy to get bogged down in how much you have to learn or how long it’s going to take to be able to really enjoy it.” Stick to an activity consistently for a month before deciding whether to keep at it or try something else.

Even if you’re just taking a small first step (like that short daily walk), stick with it consistently until it starts to feel good, then build on that. A slow-and-steady approach will make your family’s fitness journey last far longer than your latest New Year’s resolutions.

Christina Elston is a dedicated hiker and yogi, and Editor of L.A. Parent.