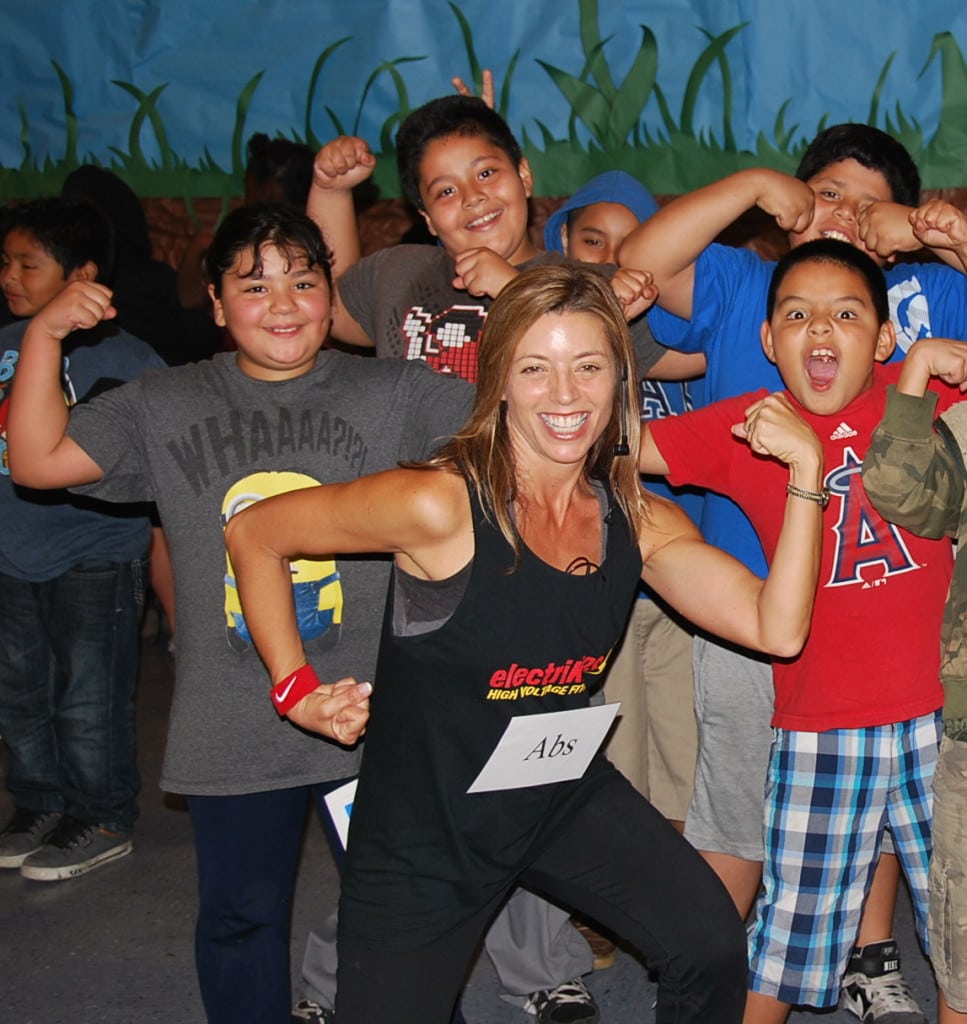 Kristen DeLeo, founder of the electriKIDS fitness program, flexes with students from Wiegand Elementary in Watts during their Fit 4 All assembly, which was sponsored by Montemalaga in Palos Verdes. PHOTO BY JAMIE KARG

Kristen DeLeo founded her nonprofit electriKIDS in 1999. She has taken her show on the road on a nationwide “Muscle Mania Tour” and hosted Muscle Mania assemblies at schools in and around Palos Verdes, where she lives. Now, DeLeo is working to move her workouts into schools that otherwise couldn’t afford them.

The certified fitness instructor and mom of two boys has based her new “Fit 4 All” program on the one-for-one model used by shoe and clothing company TOMS. She is encouraging schools with PTA support and other resources to purchase assemblies for their campuses, and in return she will donate another assembly to a “partner school” in a less-affluent area.

Inspiration for the program came when electriKIDS did an assembly at Weigand Avenue Elementary in Watts. “When I took my instructors, they were so touched by the response of the kids that there was a definite, immediate thirst for more,” DeLeo says. She introduced staff from Weigand to Becky Egan, principal at Montemalaga Elementary in Palos Verdes, and the first Fit 4 All partnership was formed. The first assemblies were in February, and more are in the works.

All electriKIDS assemblies begin with the pop tunes pumping. “We are up and moving right when they walk in,” says DeLeo. The kids warm up, do some cardio, calculate their heart rates and play the Muscle Mania Game Show to learn about muscles. “I want them to learn to pay attention to their own body and learn how it works,” DeLeo says. The 30-minute assembly wraps up with a cool-down segment and a pledge to be active every day.

After their assembly, the kids at Weigand signed a “Thanks For Sponsoring Our Workout” banner for Montemalaga. And Montemalaga principal Egan followed up by spearheading an effort to collect around 1,000 books to help create a Weigand school library.

Schools that would like to form new Fit 4 All partnerships can reserve a day of up to four assemblies for grades K-5, plus a free day at a partner school, for $500. Details are at www.electrikids.com.

Meanwhile, for parents who want to get their kids moving at home, DeLeo offers these fun ideas for kids:

Wipeout Course: Set up an outdoor obstacle course using hula hoops and other things you have around the house. Kids navigate the course with a water balloon that they try not to break – then squish onto their heads at the end.

Limbo: Grab a pool noodle, put on some music and get the kids to limbo. Spice things up with an occasional “noodle dance break” where you swing the noodle around and your dancing kids have to duck.

Wacky B-ball: Hold a hula hoop over your head and skip around your yard while your kids try to make baskets with soft bouncy balls (not real basketballs). Kids count their baskets during song number one, then try to beat their score during song number two.