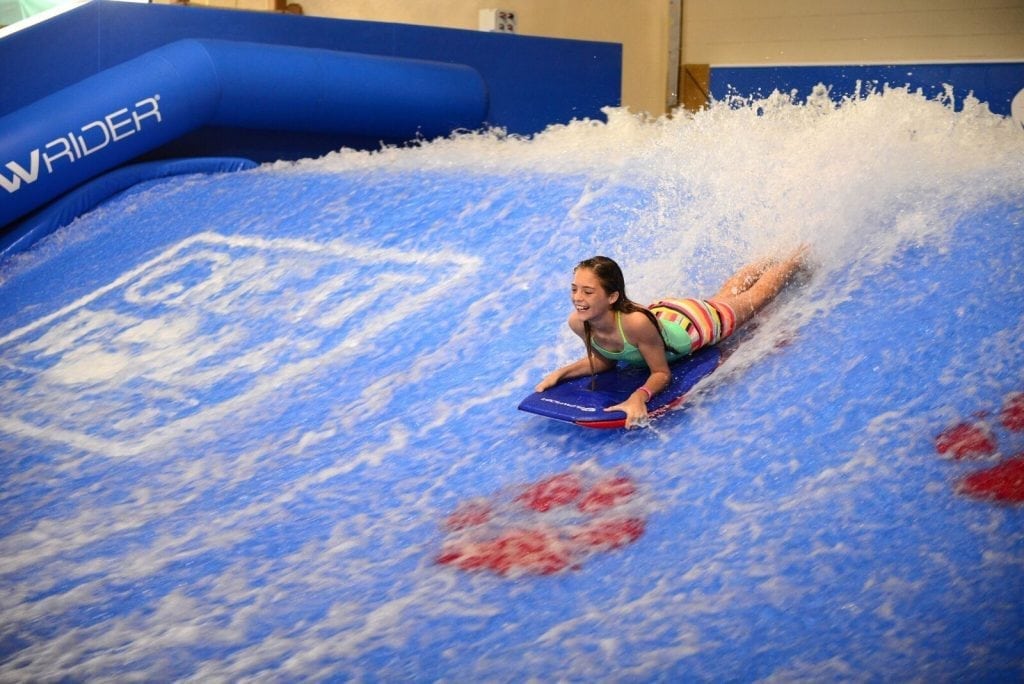 My son loves to cajole me and my husband into having in-home campouts. As the clock ticks past his bedtime, he’ll run to his room, grab his blanket and pillow, then run back into the living room or our bedroom and sing: “We’re camping out!”

For his birthday last weekend, we decided to take him and one of his best buddies for a little in-door “camping” fun beyond the confines of our house. We took them to Great Wolf Lodge Southern California in Garden Grove—a large cabin-looking resort for kids and families— one brimming with water rides, “Wolf Dens” and all the modern amenities and varieties of play an 11-year-old could want. We had to pry the boys from the hotel room. They went crazy for the part of our suite called “Wolf Den,” which, with its treehouse like flair, bunk beds and separate TV, had them yelping with joy.

We knew all manner of other fun—a MagiQuest adventure (complete with wands and “mystery boxes” located throughout the resort), an impressive arcade, glow-in-the-dark golf, mini bowling lanes, a theater, tons of food and desserts and, of course, the massive indoor water park—was just an elevator ride away.

It was great to see the boys spend so much time on thrilling water slides and in the wave pool (and to join them), but as summer approaches, the folks at Great Wolf Lodge Southern California, the largest family of indoor water park resorts in North America, remind us to beef up our water safety measures as we head for pools, water parks, lakes and beaches.

The following water-safety tips are from Aquatics Director Wendy Rosales: 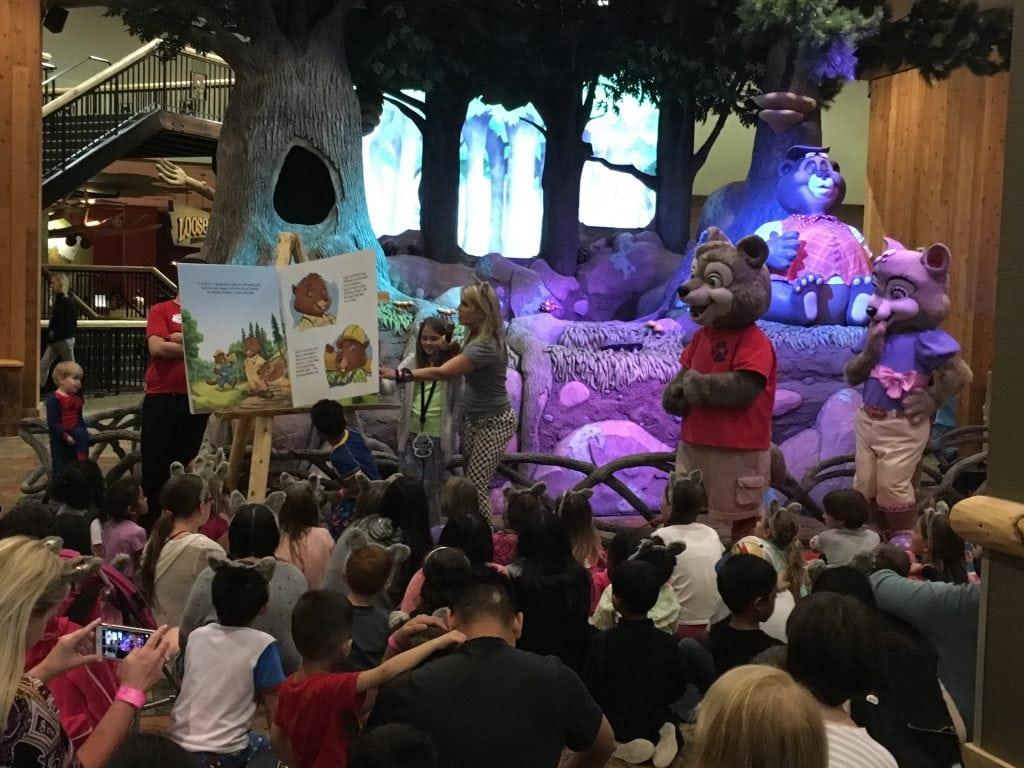 Our family got a chance to stay at one of the newest Los Angeles attractions, Great Wolf Lodge Resort and Indoor Water Park in Garden Grove this spring. This is the 13th GWL in the U.S., but the first in California. I had never heard of this family resort, but friends on the East Coast love having the option of an indoor water park in the middle of winter and let me know how much fun they thought we’d have.

We arrived and received Paw Passes that allow visitors to save on activities around the resort. We also got cute little pink wristbands with RFID chips embedded, which served as our room keys, passes to the water park and a way to buy anything in the resort, simply by waving your hand. The boys loved their room – which included their own private little Wolf Den and their very own bunk beds – but they couldn’t wait to get into the water park.

The indoor park was much bigger than I imagined it would be – a whopping 105,000 square feet with 12 slides, some big enough to accommodate several raft sizes. The temperature is a cozy 84 degrees and because we were indoors, there was no need to keep track of hats or chase the kids around with sunscreen.

At Fort Mackenzie, young explorers could find adventure crossing suspended cargo nets, aiming water cannons at passersby and barreling down treetop slides. There’s also a giant bucket that dumps 1,000 gallons of water every four minutes after a sequenced crescendo of beeps alerting those below to watch out below.

Much too quickly it was time for dinner, and the buffet at the Loose Moose Family Kitchen was impressive, with a few vegetarian options, many exotic vegetable preparations and some succulent cuts of meat, seafood and original chicken preparations. Each boy had a cupcake that looked tempting.

The resort has four other restaurants. Lodge Wood Fired Grill is a little fancier and offers some gourmet-style options. Hungry As A Wolf is a grab-and-go of the pizza and burgers variety smartly situated near the arcade. Grizzly Jack’s Bar and Grill is a full-service restaurant in the small outdoor section of the resort, and Bucket’s Incredible Craveables offers a more limited selection of fast food. There’s also a Dunkin Donuts that some, like me, might find essential for staying caffeinated to keep up with the kids, and a wicked little shop called Bear Paw Sweets and Eats for those who are planning on doing extra Boot Camp classes after their vacation. 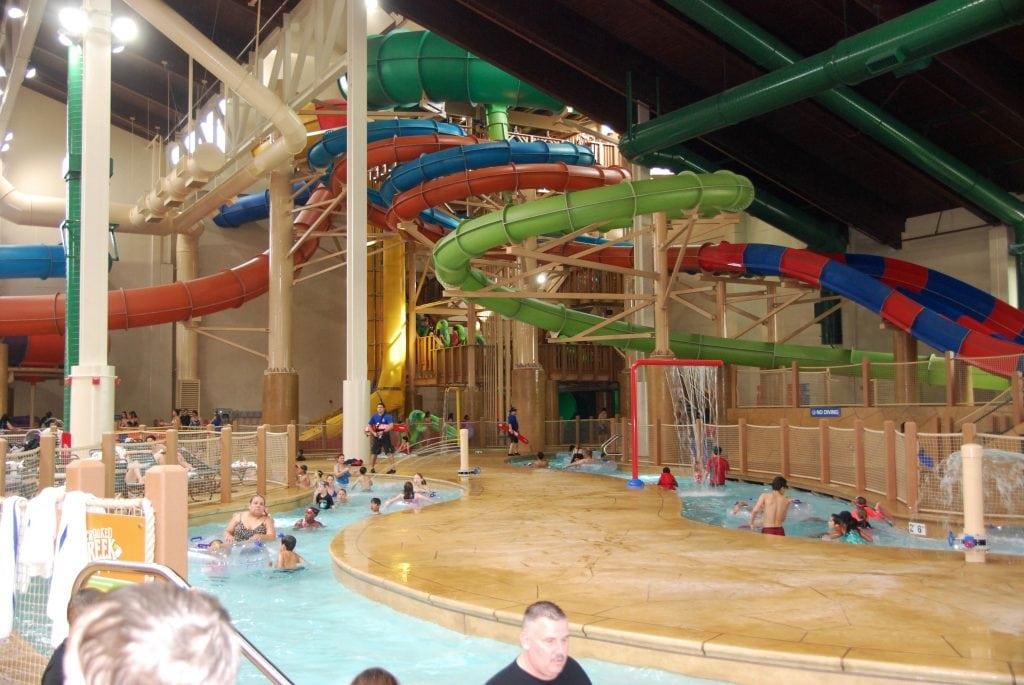 Lazy River with many of the exciting slides. PHOTO COURTESY RINA BARAZ NEHDAR

The GWL offers kids a roster of activities including daily yoga, arts and crafts and storytelling, Howl-O-Ween in October and Snowland in December.

One of the activities our family enjoyed immensely was called MagiQuest, a digital, fairytale scavenger hunt around the hotel. You start at the MagiQuest gift shop and select a magic wand that is programmed with your player name and vital stats. Then you pick one of the many available quests and head out to fight monsters, find magic crystals and save pixies. That night we uncovered another little GWL secret. What we thought were just adorable  animal decorations in the kids’ Wolf Den actually came to life and sang songs when you pointed that magic wand at them.

Younger guests can try their hand at mini adventure by joining the Clubhouse Crew, a scavenger hunt created on a smaller scale. At The Great Wolf Kids Store, they choose stuffed animal pieces to put together much like Build-a-Bear, then the nice Wolf people fill their new friends with stuffed animal fluff.

We decided to test out the waterproof pouch the hotel provided on one of the raft rides and took some great video. Then my brave boy decided to try out the Wolf Rider Wipeout, an artificial endless wave where people can surf or boogie board until their little muscles give out – as long as they can stay balanced or hold on! There is also an America Ninja Warrior style obstacle course at Chinook Cove perfect for adventurous souls to navigate. There were cute little animals floating around to swim on. And for the athletic-minded, there’s a basketball court.

Outside of the water park, on “Main Street,” you’ll find Howl at the Moon glow in the dark mini golf. There is also mini bowling at Ten Paw Alley, a spa for kids, the Northern Lights Arcade and the Howly Wood XD theater that acts like a virtual ride/video game. It’s great because the whole family can play at the same time.

We decided to end our adventure with a thrilling ride called the Wolf Tail. The rider steps into what appears to be a vertical coffin, the door shuts automatically and suddenly, a trap door opens and the poor sap is released to a straight drop through an enclosed slide. No way, I thought. But my son wanted to do it, so I had to go with him.

At the end of my ride, my hands were shaking, my heart was thumping, but I did it!

Everyone had a great time and weeks later, they still ask if we could go back. I’d say that’s a big hit and since the hotel room price includes waterpark passes, it’s actually affordable and convenient to those in the Los Angeles area. Truly the makings of a great family vacation. For more information about Great Wolf Lodge or to book your stay at the resort, visit their website.