Joining a moms’ group can help forge connections and support 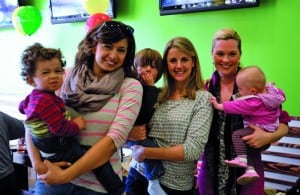 Michelle Turner says the best advice she received while pregnant with her twin daughters was from a co-worker, advising her to join a moms’ group. She found the West L.A. chapter of the National Organization of Mothers of Twins Clubs and signed up. Her daughters, Coco and Aya, are now 3 years old and the moms in that group have become like an extended family for Turner.

“I can’t imagine my life without them,” she says. “They have been such an incredible support system.”

Turner is currently president of her twins club chapter, which boasts 500 members and is open to moms from the greater L.A. area, including the San Fernando Valley and the South Bay. The group has an online forum where moms exchange advice, tips, recommendations and referrals. It also hosts monthly events featuring guest speakers, play dates at the park and moms’ night out.

“One of the hardest parts of becoming a new mom is the lack of adult stimulation that many women experience. It can feel very isolating,” says occupational therapist Jackie Rosenberg, who, since 1991, has worked with hundreds of moms through her popular Babies First Class in Sherman Oaks. “It’s so important for new moms to reach out and be with other moms.”

For Lisa Druxman, who grew up in the San Fernando Valley but started her family in San Diego, outdoor fitness was the best remedy for new-mom fatigue and stress. “With motherhood, every day is a challenge, and at first I felt really alone and overwhelmed,” she says.

Druxman, whose background is in fitness, decided to gather a few moms for a stroller fitness class 12 years ago. Soon, she was offering formal Stroller Strides classes, and today her Fit4Mom franchise includes 1,300 fitness classes nationwide.

“Our classes are designed to give women strength, both physically and emotionally, for motherhood,” says Druxman, a mom of two.

L.A. moms’ groups are eclectic, catering to women with diverse interests. They gather in living rooms to discuss favorite books, jog through Runyon Canyon and around the Rose Bowl, meet for coffee in Silver Lake and Larchmont Village, and organize play dates at the Skirball’s Noah’s Ark and Griffith Park’s Travel Town. There are groups for stay-at-home and working moms, for single moms and same-sex moms.

“In many ways, L.A. is a land of transplants,” says family therapist Susan Stiffelman, an L.A.-based parent educator and author of Parenting Without Power Struggles (Atria Books, 2012). “Many new parents don’t have extended family living close by, so you have to create your own tribe.”

Rachel Pitzel’s son, Grayson, was 3 months old when she and her family moved back to Los Angeles from Chicago. “It was hard leaving my mom friends and I worried about meeting new moms in L.A.,” recalls Pitzel. “In Chicago, you walk everywhere, so it’s a lot easier to meet people.”

Hoping to create a new community of moms, Pitzel, of Playa Vista, launched Club MomMe in February 2012. The popular group now hosts eight to 10 events each month, ranging from moms’ nights out with best-selling authors to couples workshops on baby care basics.

In the San Fernando Valley, Kelly Spears heads up the Valley Moms meet-up group, with 1,200 moms. Every day, several sub-groups come together somewhere in the city, either at a local park, a museum, the zoo or at a child-friendly restaurant.

When Spears first had her son four years ago, she was the first of her friends to have a baby. Suddenly, her life and her schedule were very different than those of her non-mom friends. She joined the Valley Moms when her son was 4 months old and quickly found a connection.

“I met my best friend through this group,” says Spears, whose parents live in Florida. “We now have this circle of 10 family friends that we celebrate holidays and birthdays with. They’re truly our second family.”

New mom separation and isolation was even more intense for Kim Lesak of South Pasadena, whose 15-year-old son, Forest, was diagnosed with Autism Spectrum Disorder at age 31/2. In order to meet other moms on the same journey, Lesak started a support group nine years ago. The meetings were informal, usually in Lesak’s living room, but the connections were strong and immediate.

The group has pool parties and picnics together. They organize an annual free education conference where vendors and speakers provide information and resources for families. They also raise thousands of dollars and are strong advocates within the school district for parents and students.

“What’s most special to see is the strong friendships that have been made,” says Lesak. “We have created a real community.”