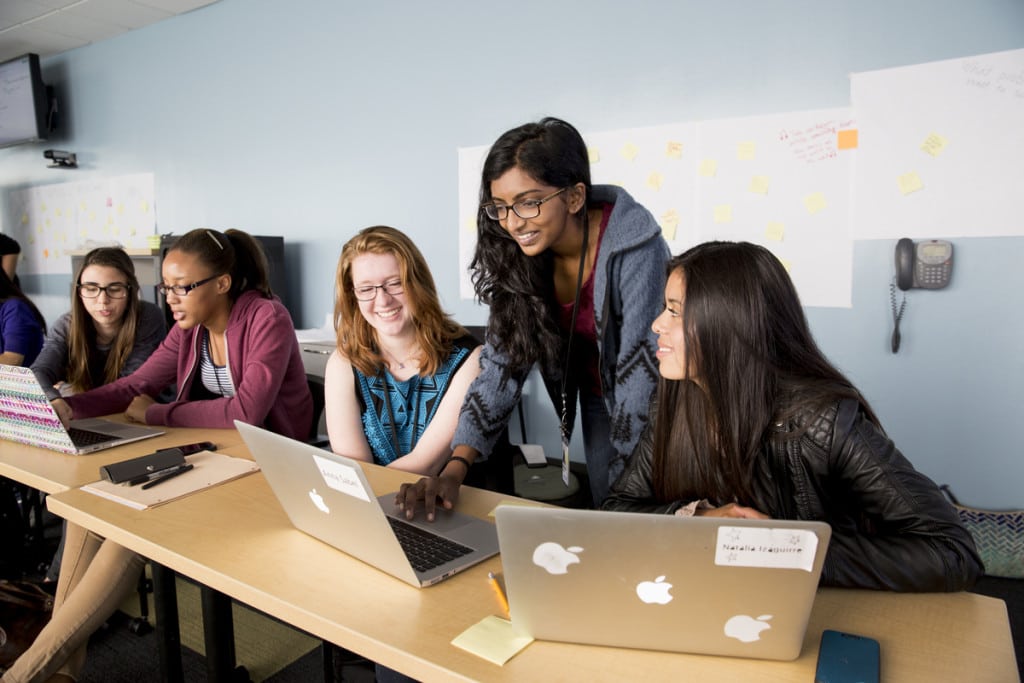 Janel Pineda always knew she loved writing, but never thought about how that could impact her life. That changed when her uncle mailed her a newspaper about a Los Angeles writing program for young girls. At age 14, Pineda joined WriteGirl, where she attended writing workshops and worked closely with a mentor throughout high school.

“I always wrote short stories and poems in my free time, but my school was strict about writing essays,” says Pineda, now an 18-year-old freshman at Dickinson College in Pennsylvania. “WriteGirl helped me take my writing seriously and develop my passion.”

Founded in 2001 by Keren Taylor, WriteGirl is nonprofit organization that pairs professional women writers with teenage girls through group workshops and mentoring. Pineda was paired with a journalist-turned-screenwriter who worked with her one-on-one every week. By her senior year, Pineda was editor-in-chief of her high school newspaper, and was nominated by WriteGirl’s associate director for a scholarship that ultimately awarded her full college tuition.

Beyond helping her develop her craft and obtain an education she emphatically says would not have happened without WriteGirl, Pineda credits the program with another life-changing experience. “The first time I read in public was April 2012, at the Los Angeles Times Festival of Books,” she says. “I was shaking, but I did it, and it was a really powerful experience. I learned that my words matter and I should be sharing them with the world.”

Imagine if every girl could undergo such a transformative experience, to be told that her voice has value. In reality, though, as they grow, many girls fall silent. For parents, it can be confusing, if not terrifying, to watch the change from carefree little girl to withdrawn teenager who could be masking a whirlwind of emotional chaos just below the surface.

“Self-esteem starts to plummet around age 9 and the signs become more overt when girls are 12 or 13,” explains Anea Bogue, founder of the Los Angeles-based REALgirl program, a series of workshops and camps for girls ages 9 to 16. “We see a blatant shift of self-confidence and self-consciousness, and she starts to shut down. She thinks she’s ugly. She’s talking about being fat. Her grades start dropping.”

While most of these insecurities are explained away as natural part of growing up, young girls are at risk of developing more serious problems. According to the New York University Child Study Center, eating disorders and depression are among the most common mental health problems in girls. A shocking 20 percent to 40 percent of girls start dieting by age 10, and by age 15, girls are twice as likely as boys to suffer from depression.

For most women, unattainable body images in the media, conflicting social pressures on sexuality and “mean girl” bullying make up a familiar narrative. But access to technology that creates an instantaneous, permanent record of poor decision making compounds these problems for girls growing up today. 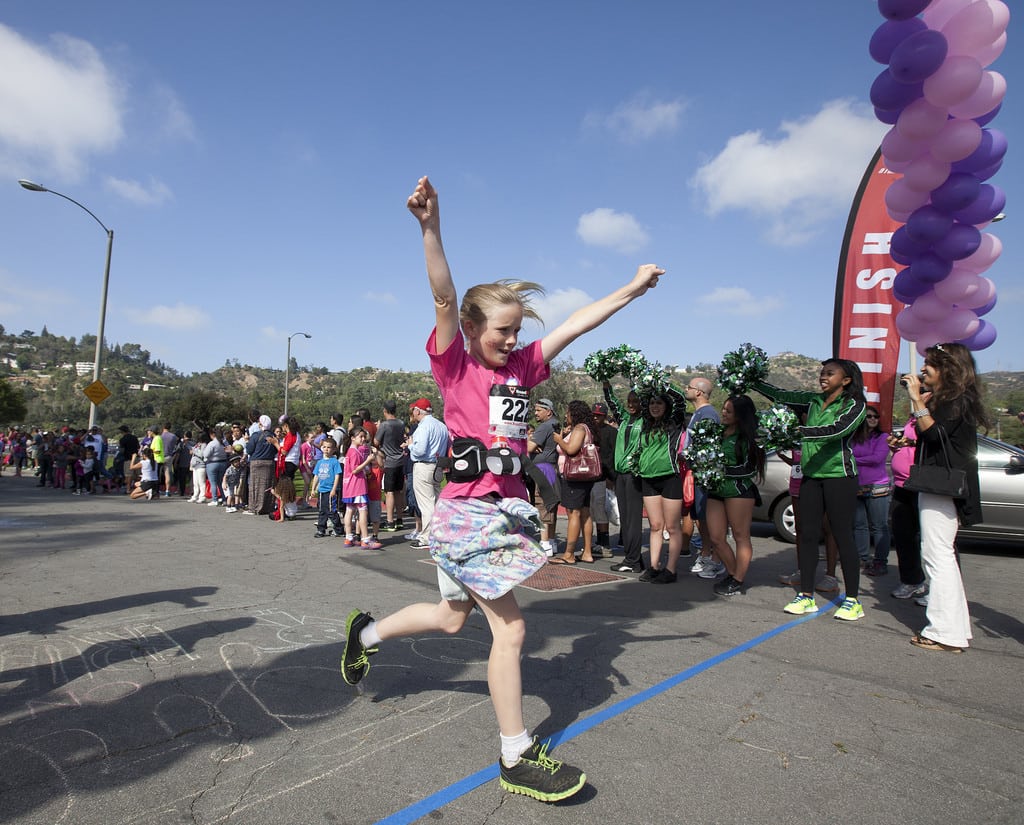 To celebrate the end of each Girls On the Run session, the girls run or walk a 5K race. PHOTO COURTESY GIRLS ON THE RUN

“Cases of anxiety and depression have been heightened in recent years, and a lot of it is related to social media,” says psychologist Vicki Chiang, Psy.D., of the Institute for Girls’ Development in Pasadena. “I don’t think the issues are that different, but there has been an increase of stressors.”

As Molly Snow, executive director of Girls on the Run Los Angeles, points out, “We want our daughters to stand up for themselves, to know that their bodies are OK, but those tools don’t come naturally.”

At Girls on the Run, the curriculum intertwines physical activity with confidence-building exercises and interactive lessons. Snow explains the safe, positive space helps girls can blossom quite quickly. “We have seen girls go through a transformation in 12 weeks,” she says. “Not only has this girl learned to find her voice and speak out, it can even change how she interacts in the classroom.”

Psychologist Melissa Johnson, Ph.D., who founded the Institute for Girls’ Development 10 years ago, agrees that many of the issues young girls face share common threads. The most popular among the group workshops offered at the Institute focus on friendship, body image and techniques for reducing stress.

While many parents wait for the red flags before seeking support for their daughters, it’s never too early to bolster a young girl’s confidence and provide her the tools to find her voice in the world. Here are some local resources for girls of all ages:

While the words “Girl Scouts” likely bring to mind their beloved cookies, this program has more than 100 years of history helping young girls and women develop lasting life skills. Girl Scouts who move on to become middle-school Cadets and high-school-level Seniors and Ambassadors may be involved with outdoor camps, an active STEAM (science, technology, engineering, arts, mathematics) program, and extensive community service.

Carol Dedrich of the Girl Scouts of Greater Los Angeles launched the ToGetHerThere Luncheon, which celebrates 100 Emerging Leaders within the Girl Scout community. All have exemplified qualities of leadership, courage and good character. At the event, young women are joined by female executives and community leaders for “speed mentoring” sessions.

“It’s an opportunity for girls to walk into a business luncheon, to learn how to open a conversation and to learn the value of networking,” says Dedrich. “We do some training beforehand and each girl comes prepared with questions. They get to meet these phenomenal women in a way that really builds their confidence.” 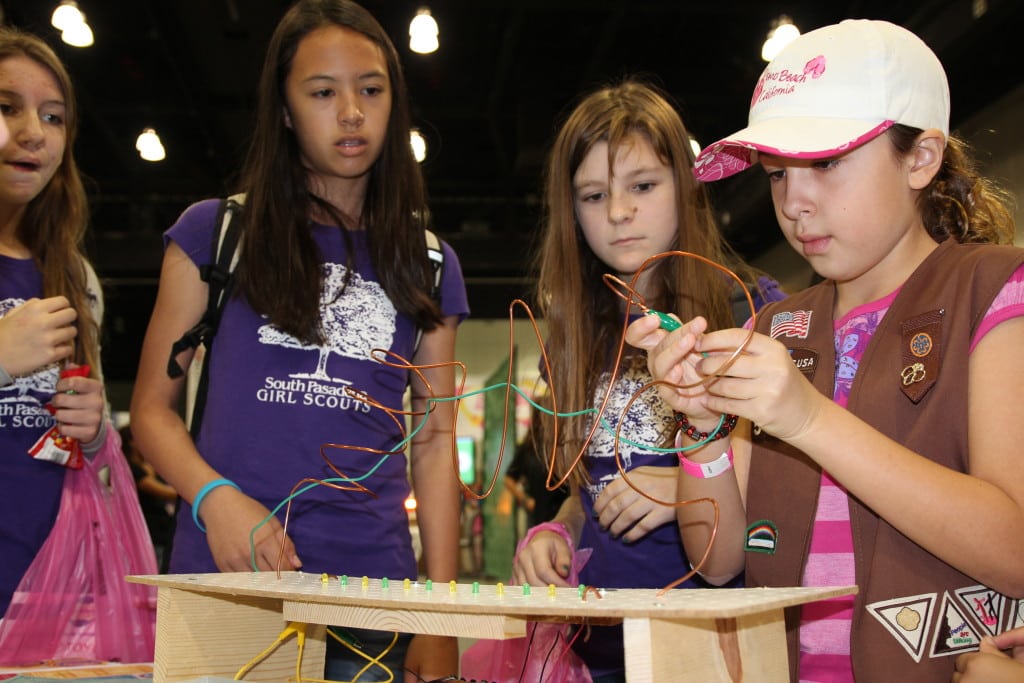 Part of a national program, the Pasadena-based Girls on the Run Los Angeles offers a 24-lesson curriculum for girls in grades 3-8. While the core of the program is based on running, each lesson weaves in team-building exercises, including skills and games for young girls. To celebrate the end of each season, the girls run (or walk) a 5K race.

“We purposely don’t provide timing clocks or talk about who won the race,” says Executive Director Molly Snow. “We get the girls to focus on their personal best.” The program serves large swaths of Southern California, including the San Gabriel Valley, the San Fernando Valley and the South Bay. Sessions are led by volunteers and usually take place in schools, parks and after-school clubs. Approximately 70 percent of participants come from low-income communities and every girl is accepted, regardless of her ability to pay the $225 fee.

The number of women majoring in computer science-related fields has declined from 37 percent in 1984 to just 12-18 percent today. By 2020, there will be 1.4 million jobs available in computing-related fields, but women educated in the U.S. are on pace to fill only three percent of those jobs.

“The issue of closing the gender gap within the tech industry is not purely a women’s issue, it’s a societal issue,” says Natalie Bonifede, director of the Girls Who Code Summer Immersion Program. “Women today make 85 percent of the consumer purchases, but aren’t on the other side designing the products. Tech companies are struggling to find qualified candidates to fill open positions, and they are desperate to hire women.”

As a national nonprofit, Girls Who Code offers summer programs and after-school clubs for students in grades six to 12. Summer programs involve seven weeks of intensive instruction in computer science, robotics and web design, as well as presentations, workshops and mentorship with female engineers, executives and entrepreneurs. 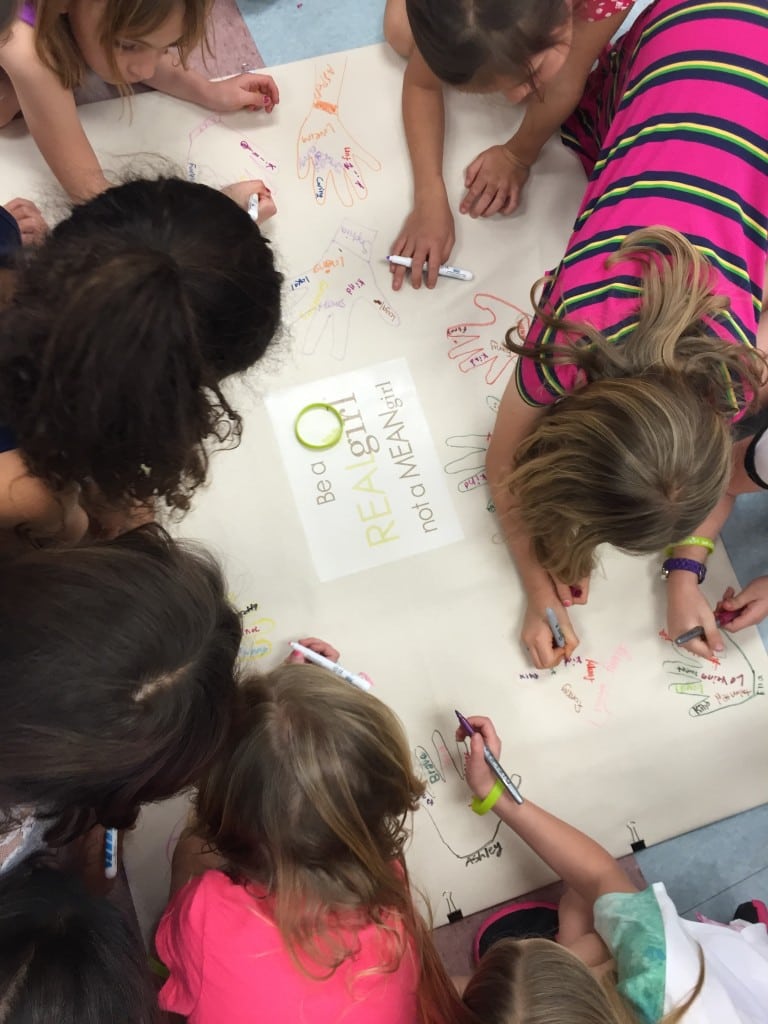 This Pasadena-based program offers workshops and after-school programs for young girls and their parents. They explore how the media influences their sense of self, how sleep deprivation and poor nutrition can affect their day-to-day lives, and the impact of social media.

“When girls are together in a group, it gives them a chance to work these ideas without being in the hot seat,” says Melissa Johnson, Ph.D. “There will be conflict and challenges, but it’s not OK for us to hurt each other.”

“Young girls start actively consciously looking at how to be an acceptable part of society and are being told they’re less valuable than boys and men,” says Bogue. “I wanted to create a program to help make them aware of those messages and build a filter. If they become resilient at age 9 or 10, they’ll be strong in their identity so that they can recover by age 14 or 15.”

Founded in 2001, WriteGirl pairs professional women writers with teenage girls in group workshop settings and one-on-one mentorship. To date, 100 percent of Write Girl graduates have gone on to college. A separate In-Schools Program was launched in 2004 to serve critically at-risk students, including pregnant and parenting teens, young women in juvenile detention and incarcerated teens.

“We see writing as the one vehicle that can have the power to be really transformative, no matter what careers they pursue,” says founder Keren Taylor. “Girls might come in resistant, with a hoodie over their head, but over time we show we’re not judging them. It’s just about them and their original, unique voice.”

Sarika Chawla is an L.A. writer and mom to a preschooler.