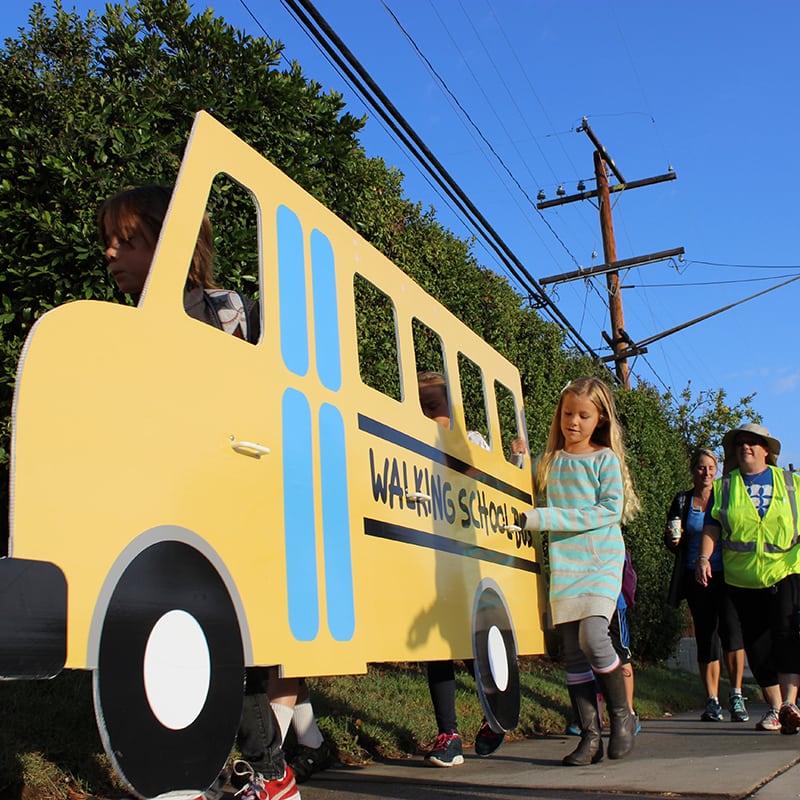 The “walking school bus” gives many students in Redondo Beach Unified schools a little extra exercise before and after school. PHOTO COURTESY RBUSD

While students in other districts will head back to school in cars, buses and SUVs this fall, many in the Redondo Beach Unified School District will take the “walking school bus” with parents and volunteers.

When they arrive on campus, they’ll begin their day with eight minutes of exercise led by teachers and faculty. At lunch, enticing displays of fruits and vegetables are generally the first thing they’ll see in the cafeteria – some of it from their school gardens. Classroom time might include activity breaks and mindfulness and nutrition lessons.

The result? A district-wide obesity rate of just 6.4 percent – compared with a more than 20-percent rate 10 years ago.

The transformation started around 2006, when RBUSD partnered with the Beach Cities Health District, a public agency devoted to preventive health in Hermosa Beach, Manhattan Beach and Redondo Beach. The school district and Beach Cities created LiveWell Kids for kindergarten to fifth-grade students and, later, LiveWell Tots for preschoolers.

They began the effort by getting buy-in from school administrators and staff, teachers and parents. “We knew that it was going to be an evolution of sorts. It wouldn’t be a revolution. It wouldn’t be immediate,” says RBUSD Superintendent of Schools Steven E. Keller.

They talked with parents at parent-night and open-house events, asking for their help at home – and in the school gardens. “A lot of parents stepped up, and over the years we’ve had thousands of parents trained in how to teach nutrition and gardening skills,” says William Kim, M.D., Beach Cities’ chief medical advisor. Parents trained as docents also help teachers with the classroom lessons.

After all that, getting the kids on board was easy. “The kids eventually became the advocates,” says Keller, whose daughter is entering second grade in the district.

And the program is thriving. “Every morning, if you’re at an elementary school, there’s eight minutes of exercise. Period,” Keller says. “Every kid is there, every staff member is there, you have parents there. So, you have that kind of baked into the instructional day to get the kids started in the right direction. All the elementary schools have a thriving garden, and that wasn’t the case 10 years ago.”

“Everybody wants the best for our children, so it was an easy sell,” says Kim. “We were just amazed at how well it took off and the fantastic results that have been obtained.”

Kim and Keller say these types of activities could be woven into school programs anywhere. Keller suggests a school’s parent-teacher organization as a good place to launch the effort, and Kim says Beach Cities is happy to offer tips to parents interested in getting started. Keller points out that as important as it is for parents to teach their kids healthy habits, kids are in school for as long as eight hours at a stretch. “There has to be a component during the school day,” he says.

The payoff – including lower obesity rates and fewer health problems – can last well beyond the school years. “These,” says Keller, “are lifelong values the kids will take with them.”

Learn more about the program at bchd.org/livewellkids.