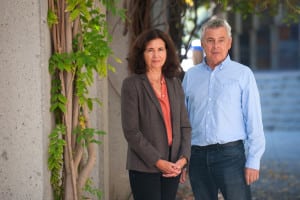 Working with mice bred to display characteristics of fragile X, Christine Gall, Ph.D.; Gary Lynch, Ph.D., and colleagues found that when these mice were trained using multiple short sessions, they performed as well on memory tests as normal mice did. When trained in a single prolonged session, the fragile X mice performed poorly.

Researchers tried varying the number of training sessions and the length of the breaks between sessions, but this combination of three sessions one hour apart “seemed to be almost magic,” says Gall.

Gall says she believes this training method could help humans with fragile X and individuals with other types of special needs, and has a federal grant to study the technique in mice bred to have Down syndrome and other forms of autism. She and Lynch also plan to partner with the university’s Center for Autism Research & Translation to study the technique in children with fragile X.

Meanwhile, Gall sees no reason that parents shouldn’t experiment with the technique at home, as there is no way it could cause any harm. Taking an hour break between short study sessions, she explains, gives the brain a chance to take information “off the desktop” and file it away for later use. “The hard thing is for someone to try and cram,” she says. “Even in a mouse, they have burnout.”