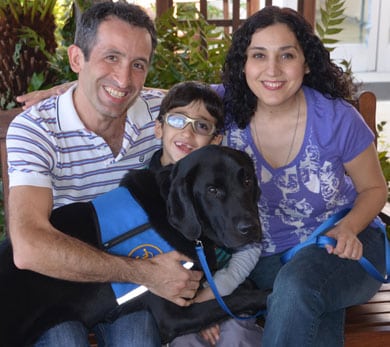 Eight-year-old Daron, of Van Nuys, has a tight knit family. They have been through a lot together. Daron has cerebral palsy and needs a lot of support, but his parents, Hagop and Armine, and his older sister, Ani, are devoted to him. They will do just about anything to make Daron smile.

That is why the family applied for an assistance dog for Daron from Canine Companions for Independence. The nonprofit organization enhances the lives of people with disabilities and special needs by providing highly trained assistance dogs and ongoing support to ensure quality partnerships. It was not a small undertaking. The family had never had a dog before and really had no idea what to expect. Learning the commands in English would be a bit of a challenge, too, because Hagop and Armine’s primary language is Armenian. They decided to forge ahead anyway, because they believed an assistance dog would benefit Daron.

It has. In February, Canine Companions matched Daron with a black Labrador/Golden Retriever cross named Lionel III. Daron does not speak much, but his joy around Lionel is unmistakable. Daron delights in games of fetch with Lionel, enjoys grooming the dog and loves to snuggle next to him – all of which have therapeutic benefits. Lionel is a great motivator for Daron to practice his speech and motor skills.

“When Daron grooms Lionel, he has to open his hand to grasp the brush,” explains Armine. “That’s an accomplishment for Daron. Holding the leash is, too. He can do that independently, which is really nice. Lionel helps Daron do things that he would not otherwise do.”

Lionel’s biggest benefit to Daron, though, is companionship. “When I saw Daron snuggle with Lionel for the first time, I could not help but get emotional,” says Hagop. “I was just so happy for Daron. Something was different for him. We had never had a dog before. It was a great experience!” Now, Daron can share his love for his dog with others, which helps people to connect with him.

“I wish Canine Companions was an international organization,” says Armine. “When we were training with Lionel, it was the first time we felt happy to have a child with a disability because it was such an amazing experience. We are used to people just looking past us or ignoring us. We are so happy to be able to have an assistance dog.”

Canine Companions is recognized worldwide for the excellence of its dogs, and the quality and longevity of the matches it makes between people and dogs. There is no charge for the dog, its training and a lifetime of ongoing follow-up services. For more information, visit www.cci.org or call 1-800-572-BARK.