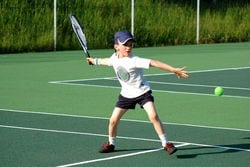 If you’ve got a devoted teen or tween athlete at home, your best shot at keeping them injury-free this year might be to convince them to branch out. Yes, kids can get hurt playing high-contact sports such as football or soccer, but John Rodarte, M.D., who chairs the department of pediatrics at Huntington Hospital in Pasadena, and practices privately in La Cañada, says overuse injuries in kids who focus too much on a single sport are on the rise.

“I tend to start seeing it around double digits – 10, 11, 12,” says Rodarte, explaining that this is the age when athletes often drop other sports and play just one year-round. Between sports camps, summer leagues and summer training, they start the school year without having had a break. “They’ve been going all summer long,” he says.

Rodarte, who has spent 17 years as team doctor for the Schurr High School Spartans football team and eight years on the medical staff for the Los Angeles Dodgers, says it can be tough to persuade kids to take a break from training for that coveted spot on the team because other kids are training hard as well. “The competition is out there,” he says. “It is a challenge.”

Still, he advises taking periodic two-week to one-month training breaks where kids work their core, start a stretching program or swim – but don’t play or train for their focus sport. “You want to maintain your aerobic fitness, just use some different muscle groups,” Rodarte says. “This is the healthiest way to let your child be that great athlete.”

Kids who don’t switch things up risk injury and time on the sidelines. “They’re getting stress injuries that are keeping them out just as long as a broken arm,” Rodarte says.

His sons, ages 8 and 11, play soccer – and he’s hoping to coax them toward baseball as well.