Once upon a time, driving down Whitsett Avenue in North Hollywood meant a trip through orchards filled with orange trees, with the occasional billboard adding color and excitement. The orange groves are long gone, and for years the stretch of Whitsett between Sherman Way and Saticoy became an area of blight.

A lengthy community clean-up and planting effort that began in 2013 transformed the area into a clean and green space, and now the orange groves have returned – in a way.

The North Hollywood West Neighborhood Council, the North Hollywood Northeast Neighborhood Council and State assemblyman and L.A. City councilmember Paul Krekorian commissioned muralists Ernie Merlan and Levi Ponce to create a 9,000-square-foot mural depicting the area in days gone by. Merlan – Program Director at Exceptional Minds, a nonprofit vocational school that helps prepare young adults with autism for careers in visual effects and post-production – got some of his students to help out. 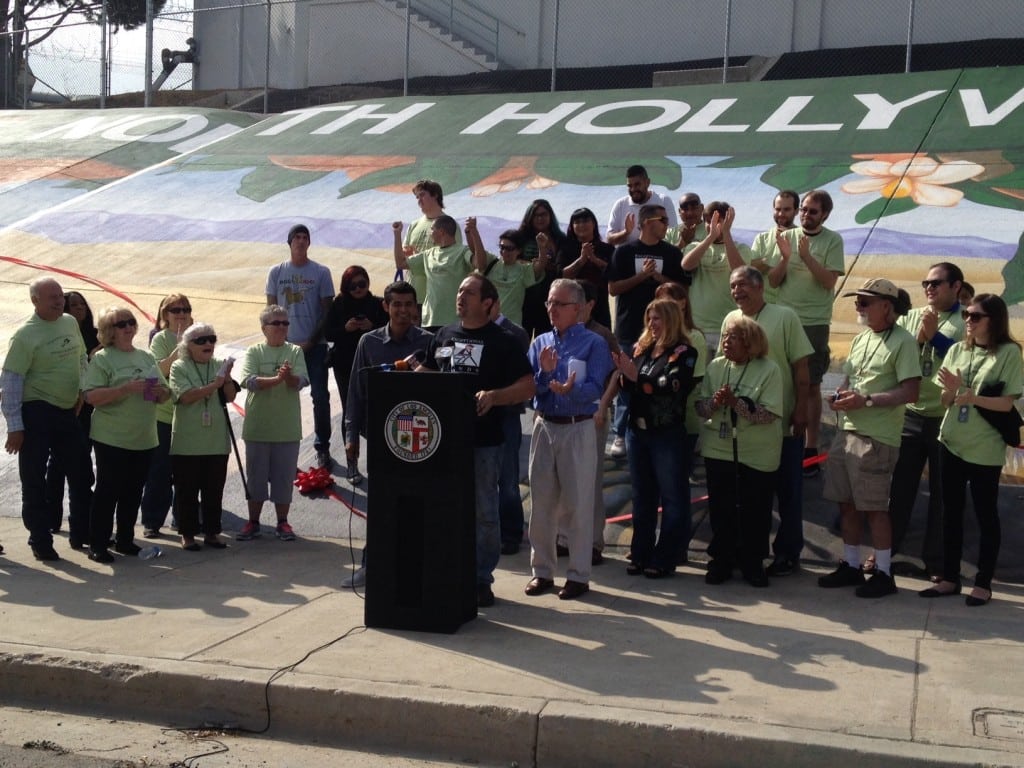 Ernie Merlan, Program Director for Exceptional Minds digital arts school for young adults with autism, dedicated the new NoHo mural after weeks of hard work by his students at Exceptional Minds, who spent their weekends and spare time prepping and painting to bring his design to life.

The students helped prep and paint during weekends and in their spare time, and the “Vintage North Hollywood” mural was dedicated Nov. 16. Krekorian was there for the ribbon cutting, as were friends and family of Exceptional Minds students.

The school’s close working relationship with the movie industry has provided its students with industry experience – and, in many cases, movie credit. Exceptional Minds students have worked on several high-profile projects, including post-production for “Dawn of the Planet of the Apes,” Oscar-nominated movie “American Hustle,” and the end-credit screen crawl for the 2012 motion picture “Lawless.”

They are usually involved with the latest visual technology, but the students’ work on the mural has helped bring back a bit of “old Hollywood” to L.A., offering local drivers a glimpse into the past.